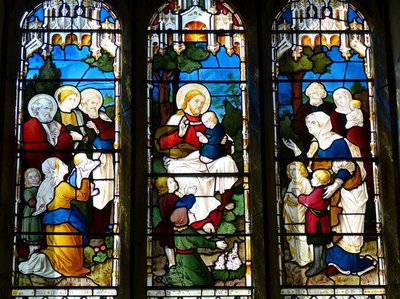 What a strange little section of Mark's Gospel this is. It seems so wrong that Jesus would dismiss his mother and his brothers and sisters in this way. Why would he do that?

Well just before this incident we are told that after choosing his disciples he 'went home' and the crowd followed him. The villagers think he is mad, and his family want to restrain him! They have known Jesus for thirty years, and we might have thought they were supportive of his ministry, but perhaps they were concerned for his safety. After all this is not a time to upset either the Jewish leaders or the Romans. From the New Testament we know some of the brothers were to be members of the new Christian church after Jesus' death: James, Joseph (known as Joses), Judas (known as Jude), and Simon. His sisters are not mentioned by name.

From this little section I don't think we can see anything hugely negative in the words of Jesus, rather he is making the point that those who have faith in him and in God are now his true family, regardless of not having any blood relationship. He is not rejecting his family, but rather welcoming all those who follow him as his family. He obviously does not lose contact with his family, for Mary is at the foot of the cross, and after his death we hear of his brothers in the new Christian church.

Lord Jesus,
You have taught us that we are children of God,
that we should call Him, Father,
and that we are members of one family.
Teach us what true community is all about;
show us how to care for the vulnerable and weak;
how to welcome newcomers and visitors;
and encourage us to nurture each other,
within the Christian family.
Amen.

You could look up the following reading from Mark's Gospel:

The following site answers some questions about Jesus' siblings: