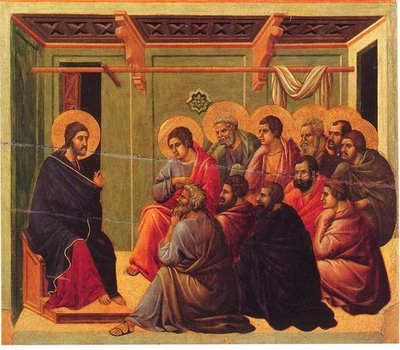 Then Jesus summoned is twelve disciples and gave them authority over unclean spirits, to cast them out, and to cure every disease and every sickness. These are the names of the twelve apostles: first, Simon, also known as Peter and his brother Andrew; James son of Zebedee, and his brother John; Philip and Bartholomew, Thomas and Matthew the tax-collector; James son of Alphaeus and Thaddaeus; Simon the Cananaean, and Judas Iscariot, the one who betrayed him.

What's the difference between a 'Disciple,' an 'Apostle' and an 'Evangelist'? Well, an 'Apostle' means someone who is sent with a purpose - like a messenger. In the New Testament it's mostly reserved for the twelve disciples. The word 'Disciple' is normally used of someone who is a student, and while we use it of the twelve men who followed Jesus, we also use it of others, including women. An 'Evangelist' is someone who proclaims, or preaches, the Gospel - the Good News of Jesus Christ. Today we look at four of the twelve Apostles to see what we know about them:

So are you a disciple - a student? Is God calling you to more than this?

Lord God,
You called the most unlikely people
to follow You,
men and women without education,
and those in despised occupations.
Help us to realise that You call us today.
May we not ignore Your prompting,
but find out exactly what that call is.
Amen.

You might like to look up this scene from the film 'The Son of God' about the call of Simon Peter: