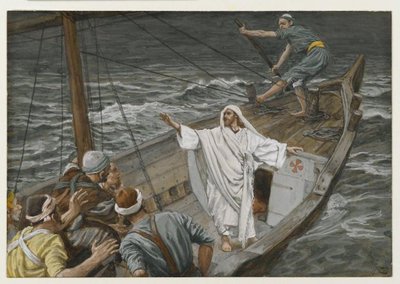 One day Jesus got into a boat with his disciples, and he said to them, 'Let us go across to the other side of the lake.' So they put out, and while they were sailing he fell asleep. A gale swept down on the lake, and the boat was filling with water, and they were in danger. They went to him and woke him up, shouting, 'Master, Master, we are perishing!' And he woke up and rebuked the wind and the raging waves; they ceased, and there was calm. He said to them, 'Where is your faith?' They were afraid and amazed, and said to one another. 'Who then is this, that he commands even the winds and the water, and they obey him?'

The Sea of Galilee is a fresh-water lake some 13 miles long and at its widest about 8 miles, and is the second deepest freshwater lake in the world. Because of its shape it funnels the wind, and frequent fierce storms arise. The disciples were accustomed to the lake, but even they were shocked at what was happening.

We see this little episode in Matthew, Mark and Luke's Gospels, with slight differences in wording. Mark for instance indicates that other boats were also in the area, so quite a few lives were saved when Jesus rebuked the storm and all was still. The miracle proves the authority of Jesus over nature for Christians, but perhaps the more puzzling thing is the comment he makes about their faith, or lack of it. To what does his words "Where is your faith?" apply? Is he telling them off because they do not ask God for help, or what? It seems likely that he means they should have had faith that God would not allow the boat to sink with him on board.

Lord Jesus Christ,
help us to make sure
that we worship You
and not the things of this world,
and that we place You
at the centre of our Church
and our life.
Amen.