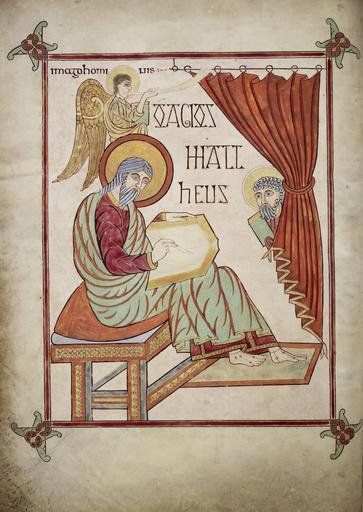 As Jesus was walking along, he saw a man called Matthew sitting at the tax booth; and he said to him, 'Follow me.' And he got up and followed him.

And as he sat at dinner in the house, many tax-collectors and sinners came and were sitting with him and his disciples. When the Pharisees saw this, they said to his disciples, 'Why does your teacher eat with tax-collectors and sinners?' But when Jesus heard this, he said, 'Those who are well have no need of a physician, but those who are sick. Go and learn what this means, "I desire mercy, not sacrifice." For I have come to call not the righteous but sinners.'

This short section of Matthew's Gospel give us an amazing little picture of the way Jesus worked. All we know about Matthew at this stage is that he was a tax-collector (but it's probable that he was responsible for producing the Gospel according to Matthew), which tells us that he was hated by all Jews. The only tax they were commanded to pay was Temple tax, and paying tax to the Romans with pagan coins was truly hated. Such men were also considered to be dishonest rogues. Because of this Matthew would have been a social outcast and shunned by his fellow citizens.

Notice that Jesus 'saw a man' - he didn't see a tax-collector, he saw a man - he saw the person beneath. He calls Matthew to follow him, and to be his disciple. Unlike others he sees something in Matthew that they did not see, and in response Matthew saw something in Jesus that others did not always see, and we are told he simply got up and followed him, though perhaps like the fishermen he had already seen or met Jesus. It's likely that Matthew took Jesus back to his house, where other tax collectors joined them, much to the Pharisees' disgust..

There are two important things to learn from this story. First, notice how Jesus carried out his mission as he 'passed by'. In other words he took every ordinary opportunity to call people to God. We too should learn to pass on the good news during our day-to-day activities. Second, notice that Jesus was not blinded by prejudice, or bias, he saw a human being, not a hated tax-collector. We must learn not to see a soldier, a politician, a taxi-driver, a homeless person, or a policewoman, but a human being who may need help as who also needs to learn about Jesus.

Lord Jesus,
teach us how to pass on our faith
to others without scaring them off.
Teach us to see below the outward appearance
of those we meet,
to the person beneath
and their needs and concerns.
Teach us to realise that You call each of us
to pass on Your Good News.
Amen.

You might like to look up this simple, but really informative article on what we know about Saint Matthew: