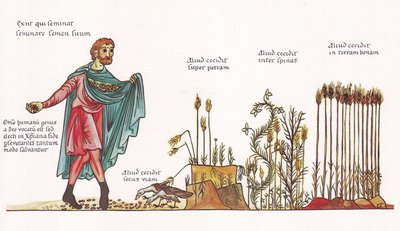 That same day Jesus went out of the house and sat beside the lake. Such great crowds gathered around him that he got into a boat and sat there, while the whole crowd stood on the beach. And he told them many things in parables, saying: 'Listen! A sower went out to sow. And as he sowed some seeds fell on the path, and the birds came and ate them up. Other seeds fell on rocky ground, where they did not have much soil, and they sprang up quickly, since they had no depth of soil. But when the sun rose, they were scorched; and since they had no root, they withered away. Other seeds fell among thorns, and the thorns grew up and choked them. Other seeds fell on good soil and brought forth grain, some a hundredfold, some sixty, some thirty. Let anyone with ears listen!'

Parables as we know, are stories that Jesus told with a 'heavenly meaning' set alongside them, but why did he use them? Today, we believe in saying things as they are - in 'Telling it as it is'!. We believe in unvarnished truth, even if it upsets everyone. But in the time of Jesus it was fashionable for religious leaders to talk in parables, and the best story-tellers developed large followings.

One of the main reasons seems to be that it helps people to remember the point of the story. We may have listened to thousands of sermons but we remember few of them. However a simple story can survive in our memory, even if we have to think through it to come to the moral lying behind it. It also makes it easier for us to apply the meaning of what Jesus is saying when we're ready to really hear his words! 'Telling it as it is', may only apply to today, and tomorrow the situation can change, but a story can be still applicable centuries later.

Who can forget the story of the lost sheep, or the lost pearl, or the lost son (the prodigal son!)? Can you remember these stories today, and if so can you work out what they mean, without looking them up in Luke Chapter 15? And what about the meaning of the Parable of the Sower, above? Start with the thought that it is about God's Kingdom of Love, and those who hear it! Are you the seed grown in good soil, producing much fruit?

Lord Jesus
we thank You for Your teaching;
for the stories that we know so well;
and for what they mean.
Help us to look beyond the story
to understand them
and apply them to our life,
Amen.

I used this cartoon video to look at the purpose of Parables on 16th March 21, if you didn't see it, you might like to look at now:

Alternatively you could look at this simple explanation of Parables, made for children, with drawings and voice: