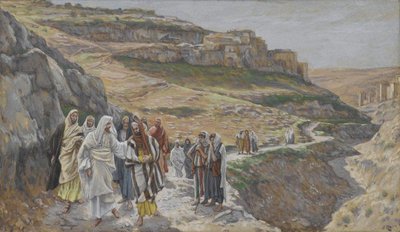 They were on the road, going up to Jerusalem, and Jesus was walking ahead of them; they were amazed, and those who followed were afraid. He took the twelve aside again and began to tell them what was to happen to him, saying, 'See, we are going up to Jerusalem, and the Son of Man will be handed over to the chief priests and the scribes, and they will condemn him to death; then they will hand him over to the Gentiles; they will mock him, and spit upon him, and flog him and kill him; and after three days he will rise again.'

In a few lines Mark sets the scene for what is to happen to Jesus in Jerusalem. It has always been a conscious decision by Jesus, and started with his withdrawal to the north to Caesarea Phillipi to spend some time with the disciples. This was followed by his move south for a short time back to Galilee, before the irrevocable move to Judea and the hill country, and then towards Jerusalem. In these few sentences that show us what is to await Jesus, we should also note how alone Jesus is - he is 'walking ahead' of the others. Behind him come the disciples who are 'afraid'. We can almost feel them dragging their heels.

We also need to look at the title he gives himself: the 'Son of Man'. This phrase appears 70 times in the Gospels. In Aramaic (the language that Jesus spoke) it simply meant 'an ordinary man'. But many scholars point out that when this is used in the book of Daniel it seems to be a title for the Messiah (see Daniel 7.13-14) - a Messiah who would not be introducing a violent revolution, but who would seek to reconcile humans to God.

Lord Jesus,
You walked alone ahead of Your disciples,
on the road to Jerusalem,
while knowing what awaited You.
But You also knew that Your Father was with You.
May we face the future with such confidence
that God is with us,
in whatever happens in our future.
Amen.

The following interesting site gives the journeys that Jesus made at different times of his life in a visual form: