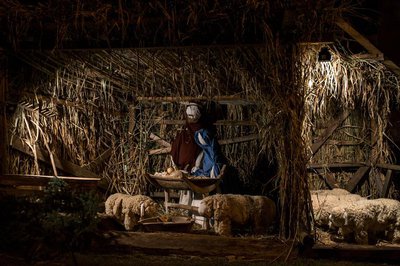 Then you spoke in a vision to your
faithful one, and said:
'I have set the crown on one who is mighty,
I have exalted one chosen from the people.
I have found my servant David;
with my holy oil I have anointed him;
my hand shall always remain with him......
He shall cry to me, "You are my Father,
my God, and the Rock of my salvation!"
I will make him the firstborn,
the highest of the kings of the earth,
and my covenant with him will stand firm.
I will establish his line for ever,
and his throne as long as the heavens endure.'

The lectionary appoints Psalm 89 to be read for a Eucharist held this morning, and is ostensibly about King David, but as Charles Spurgeon the great Baptist preacher says Christians see this prophecy as referring to Jesus, the Messiah.

Anything that says "King of kings" has me flinching as it immediately reminds me of Handel's Messiah, and the 'Hallelujah' chorus. The sopranos have some long slow, low, notes to the words 'King of kings, and Lord of lords'. That's ok. Then Handel puts the same long phrase up another three notes. Still ok. But then a second later you're singing this on an E and F and then finally an F sharp and a G. Not musical? Well as a soprano in my thirties, singing with the English Baroque Choir it was easy, but as a retired soprano in Wales, it was a struggle not to shriek.

This glorious piece of music is celebrating the Messiah, King Jesus, and reminds us of a shocking truth that God was born as a human baby in a dirty stable. The creator of the world came to earth to rescue us from the darkness of sin.

Lord God,
King of all kings,
and Lord of all lords,
we welcome You once again
this Christmas,
and invite You into our lives.
Help us to take Your love
into our family and our community,
and welcome you afresh.
Amen.