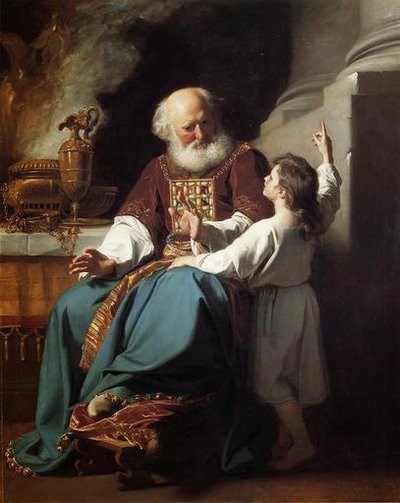 Now the boy Samuel was ministering to the Lord under Eli. The word of the Lord was rare in those days; visions were not widespread.

We saw Hannah in Thoughts for the Day recently (See Dedicated to God). She was praying desperately for a male child, and promised God he would be dedicated to Him as a Nazarite. God answered Hannah's prayers and a son was born. Elkannah and his wife called him Samuel, and when he was old enough Hannah took him to the temple at Shiloh where he was effectively to serve an apprenticeship.

As we see from our reading today Eli the high priest is disturbed in his sleep by Samuel who thinks the elderly priest is calling him. After the third time Eli realises that it is God calling the boy. Samuel will go on to be the last of Israel's Judges and the one who will anoint Saul as the first king of Israel.

God still calls people today through the Holy Spirit, but not always by voice. It can be in many ways: through something we read; words by a friend; from our bibles; by hearing a sermon; or even through these Thoughts. Sometimes we don't realise what is happening until we look back. One important proviso is that we should always test that it's God speaking and not just our imagination. A good place to start is through conversation with God!

Lord God,
we know You speak to us, but
sometimes like Samuel we don't
recognise your call;
or we don't want to hear Your call.
Help us to be aware of Your presence,
through the everyday things of life,
and to answer "Speak, Lord,
Your servant is listening."
Amen.