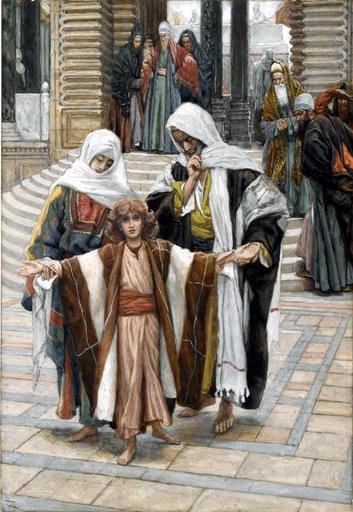 Assuming that he was in the group of travellers, they went a day's journey. Then they started looking for him.....After three days they found him in the temple, sitting among the teachers, listening to them and asking them questions. And all who heard him were amazed at his understanding and his answers.

When his parents saw him they were astonished; and his mother said to him, 'Child, why have you treated us like this? Look, your father and I have been searching for you in great anxiety.' He said to them, 'Why were you searching for me? Did you not know that I must be in my Father's house?' But they did not understand what he said to them. Then he went down with them and came to Nazareth, and was obedient to them.

Can you imagine losing your 12 year old son? The frantic search, the police involvement? The search by Mary and Joseph would have been the same, but without the help of modern technology. It took three days to find him, but the relief quickly turns to a gentle reprimand by Mary.

We need to remember two things though. A 12 year old Jewish boy would have been considered an adult and responsible for his own actions. Also, we need to note the words "my Father's house". Mary thinks Jesus is saying "Joseph's house", but of course he is saying "God's house". Jesus is moving towards the work he must do for his Heavenly Father, even though this will not fully begin for almost twenty more years.

Jesus was fully human, and here we see the way he continues to learn about his faith, and keep close to his Heavenly Father. Can we learn from this example?

Lord Jesus
You continued to grow
closer to God
as a young man,
and to learn more about Him.
Help us find to out more about our faith,
and to grow closer to You this year.
Amen.

If you would like to learn a lot more about Jesus, as a child and young adult, look up this site: