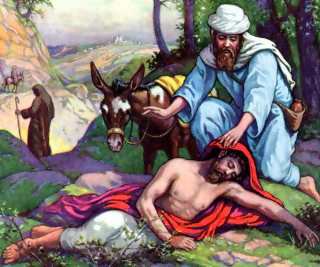 Just then a lawyer stood up to test Jesus.....wanting to justify himself, he asked Jesus, 'And who is my neighbour?' Jesus replied, 'A man was going down from Jerusalem to Jericho, and fell into the hands of robbers, who stripped him, beat him, and went away, leaving him half dead. Now by chance a priest was going down that road; and when he saw him, he passed by on the other side. So likewise a Levite, when he came to the place and saw him, passed by on the other side. But a Samaritan while travelling came near him; and when he saw him, he was moved with pity. He went to him and bandaged his wounds, having poured oil and wine on them. Then he put him on his own animal, brought him to an inn, and took care of him....

Which of these three, do you think, was a neighbour to the man who fell into the hands of the robbers?' He said, 'The one who showed him mercy.' Jesus said to him, 'Go and do likewise.'

Well we all know this story, but it's worth looking at again. Samaritans in the time of Jesus were hated by traditional Jews. Originally descendants of pagan tribes brought in by the Assyrians when they invaded the northern part of Israel, the rift between them grew over the years. Their scriptures only include their version of the Pentateuch (the first five books of the Hebrew Scriptures/the Old Testament), and they rejected Jerusalem with its Temple, building their own on Mount Gerizim near Shechem.

We tend to blame the Levite and the Priest for ignoring the man who has been injured, but both were probably on their way to the Temple in Jerusalem, and purity laws would forbid them touching the man and then going to worship.

We need to be honest with ourselves. Today, who might we ignore those in a similar situation - rough-sleepers, asylum seekers, men or women of another faith or culture, or those who are trans-gender? Yet all, according to Jesus, are our 'neighbours'. We should love them as we love ourselves.

Lord Jesus,
You taught those who listened to You,
that people we may not like
are also our neighbours,
and therefore we should love them.
Help us to be honest with ourselves,
and learn to care for all people.
Amen.