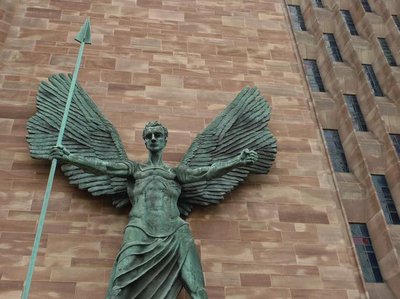 We will not all die, but we will all be changed, in a moment, in the twinkling of an eye....and the dead will be raised imperishable, and we will be changed. For this perishable body must put on imperishability, and this mortal body must put on immortality. When this perishable body puts on imperishability and this mortal body puts on immortality, then the saying that is written will be fulfilled:

But thanks be to God, who gives us the victory through our Lord Jesus Christ.

Forty years ago at the first funeral I took, this passage from St Paul's letter was requested. I was to read it hundreds of times more, though today it has gone out of fashion. The Corinthians mocked the idea that a decayed body could possibly be raised to life. Paul earlier used the idea of a seed that dies but falls to the ground will bring forth new life - a new plant. It will be different from the dead seed, but produces a new living plant.

Paul quotes words from Hosea 13.14 when he says that death has no sting now. For in the same way a new plant can appear from a seed, so God raises His own people when they die, transforming them into a fresh imperishable being. The law stated we would die because of our sin, but those who put their trust in Jesus will be raised to a new life. Death has definitely lost its sting, and God is victorious.

This is no fairy story. If you believe that Jesus rose from the dead in order to bring us back to God, then this is what happens - death is defeated - thanks to God who gave us the victory through Jesus Christ.

(Note: Great Britain has entered a period of national mourning for HRH Prince Philip, the Duke of Edinburgh. These Thoughts were written before the announcement of his death)

Lord Jesus,
give us such faith in You
that we no longer fear death,
knowing that it has been destroyed
and that in calling Your own people home,
You offer us eternal life with You.
Amen.

You might like to listen to the words 'Death where is thy sting' from Handel's Messiah, by the Cape Town Youth Choir, and soloists: