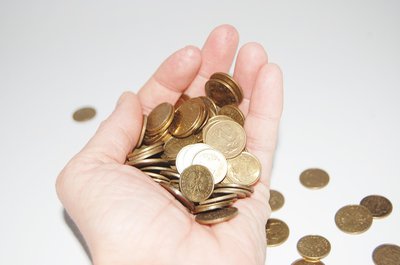 Jesus told them a parable... 'A nobleman went to a distant country to get royal power for himself and then return. He summoned ten of his slaves, and gave them ten pounds, and said to them, "Do business with these until I come back."... When he returned, having received royal power, he ordered these slaves to whom he had given the money, to be summoned so that he might find out what they had gained by trading.

The first came forward and said, "Lord, your pound has made ten more pounds." He said to him, "Well done, good slave! Because you have been trustworthy in a very small thing, take charge of ten cities." Then the second came, saying, "Lord your pounds has made five pounds." He said to him, "And you, rule over five cities." Then the other came, saying "Lord, here is your pound. I wrapped it up in a piece of cloth, for I was afraid of you because you are a harsh man; you take what you did not deposit, and reap what you did not sow." He said to him, "I will judge you by your own words, you wicked slave! You knew, did you, that I was a harsh man, taking what I did not deposit and reaping what I did not sow? Why then did you not put my money into the bank? Then when I returned, I could have collected it with interest." He said to the bystanders, "Take the pound from him and give it to the one who has ten pounds. I tell you, to all those who have, more will be given, but from those who have nothing, even what they have will be taken away ."

This parable is a somewhat perplexing one, even knowing that not all parts of a story fit into a parable. Why is the nobleman going away, and why is he giving his slaves money. Well 2,000 years ago any would-be ruler needed permission from the Roman Emperor to become a satellite ruler, so Jesus uses this image to remind his listeners that he, Jesus, is going away. We have already seen that He was on his way to Jerusalem and knew he was going to his death (see Jesus seeks out the lost on 5th July). This story about the nobleman is another reminder that he is going away, but will return.

As Christians we should not stand still, but continue growing and making progress as Christians. God gives us gifts and talents to be used, and those who are faithful to Him are rewarded. Those who are not faithful, will lose their gifts. As one great theologian (Barclay) said 'The reward for faithful servive is not rest, but more service'. God trusts us even more with the work of bringing His Kingdom into being.

Lord God,
You invite us to work with You
to spread the Good News to others,
and to help bring forward Your Kingdom
of love and peace.
Help us to be ever faithful in the work
You give us to do.
Amen.