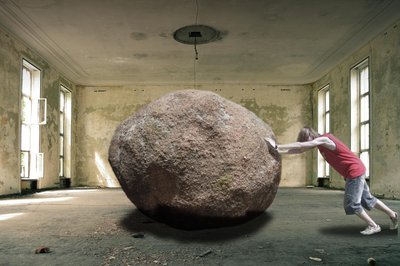 Unless the Lord builds the house,
those who build it labour in vain.
Unless the Lord guards the city,
the guard keeps watch in vain.
It is vain that you rise up early
and go late to rest,
eating the bread of anxious toil;
for he gives sleep to his beloved.

When I was a teenager my family and I moved into a village in Sussex with a pub at its centre, called 'The Labour in Vain'. It always struck me as a very odd name for a building, or a pub in this case. What on earth did it mean? Well it was years later that I came across the words in Psalm 127, and suddenly there was a little illumination.

It is quite probable that it was Solomon who wrote this psalm, or it was written for him, and therefore it could refer to the building of the Temple. But equally it could refer to the creation of a family. There is a Latin motto - Nisi Dominus Frusta - which has a similar meaning - 'Frustration without the Lord'. This is the motto of the city of Edinburgh and is part of their crest and on all official documents.

'Unless the Lord is at the centre of our lives, then we work in vain!' Would this not make a good motto for all of us?

Lord God,
unless the foundation of our life
is built on You
then we live in vain.
Help us not to forget You
when things go well,
but to build You into
the very fabric of our life.
Amen.