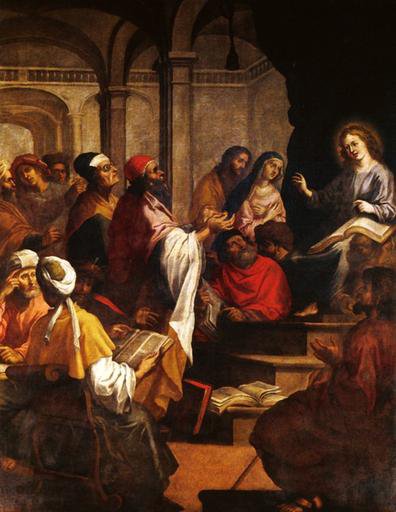 Some Sadducees, those who say there is no resurrection, came to him and asked him a question, ‘Teacher, Moses wrote for us that if a man’s brother dies, leaving a wife but no children, the man shall marry the widow and raise up children for his brother. Now there were seven brothers; the first married, and died childless; then the second and the third married her, and so in the same way all seven died childless. Finally the woman also died. In the resurrection, therefore, whose wife will the woman be? For the seven had married her.’

Jesus said to them, ‘Those who belong to this age marry and are given in marriage; but those who are considered worthy of a place in that age and in the resurrection from the dead neither marry nor are given in marriage. Indeed they cannot die any more, because they are like angels and are children of God, being children of the resurrection.....’ Then some of the scribes answered, ‘Teacher, you have spoken well.’ For they no longer dared to ask him another question.

There are many silly questions in life, like "If Cinderella's shoe fitted perfectly, then why did it fall off?" Or "Why does every rule, always have exceptions?" We get something similar today in our reading from Luke's Gospel. The Sadducees, an aristocratic group that held most of the seats on the ruling Council, the Sanhedrin, and who were usually more interested in political power than in religious matters, want to keep the status quo, particular in Temple matters, which Jesus seems to be upsetting. They didn't believe in the resurrection of the dead, nor did they look forward to the arrival of a Messiah, for he might destroy their comfortable lives. So hence their rather hilarious question - the woman marries seven brothers are becoming a widow, so whose wife will she be at the resurrection?

First, though let's look at our own beliefs about death. For me (as a protestant) once a person has died they are in God's hands, so I find the words of the Commendation at a funeral somewhat belated. My prayers change to prayers for the family and those who are grieving. Then there is the thought of how we shall recognise loved ones after death. What age will they look like?)

It is here that we should notice the answer Jesus gives. He says, basically, heaven is not like earth. and that those who are granted a place are like angels - more than that, they are children of God. We shall have it seems no need of a physical body, for the pleasures of life in the company of God far exceed anything on earth. Instead of worrying about Heaven by comparing it to earth, we would do better to leave it to our loving Heavenly Father who cares for us so much.

Heavenly Father,
Your Son taught us that
You love us like a father.
May we have faith enough to believe
that whatever lies ahead
for ourselves and our loved ones
we shall be in Your loving care.
Help us to get on with the work
that needs doing here on earth,
trusting in Your promises
as given to us through
Your Son, our Saviour, Jesus Christ.
Amen.