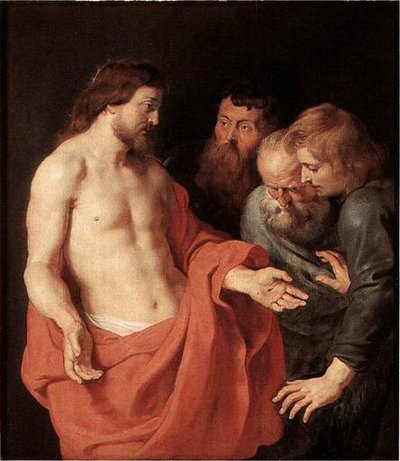 When it was evening on that day, the first day of the week, and the doors of the house where the disciples had met were locked for fear of the Jews, Jesus came and stood among them and said, ‘Peace be with you.’ After he said this, he showed them his hands and his side. Then the disciples rejoiced when they saw the Lord.....

But Thomas (who was called the Twin, one of the twelve, was not with them when Jesus came. So the other disciples told him, ‘We have seen the Lord.’ But he said to them, ‘Unless I see the mark of the nails in his hands, and put my finger in the mark of the nails and my hand in his side, I will not believe.’

A week later his disciples were again in the house, and Thomas was with them. Although the doors were shut, Jesus came and stood among them and said, ‘Peace be with you.’ Then he said to Thomas, ‘Put your finger here and see my hands. Reach out your hand and put it in my side. Do not doubt but believe.’ Thomas answered him, ‘My Lord and my God!’ Jesus said to him, ‘Have you believed because you have seen me? Blessed are those who have not seen and yet have come to believe.’

The disciples live in terror of being arrested and killed as happened to Jesus, and we see them hiding in a house behind locked doors, when Jesus appears before them. He shows them the imprints of the nails that pinned his hands to the cross, and the place where the spear had pierced his body. But Thomas is not with them and doesn't believe they have seen the Lord.

Thomas is a pessimist. Previously when Jesus proposed to go to Bethany because Lazarus was ill the disciples had objected saying it was too dangerous as the Jewish leaders want to kill him. But Thomas had said "Let us also go, that we may die with him" (John 11.7-16), so his courage was not in doubt. He expected to die. He loved Jesus enough to follow him to Jerusalem, but ultimately what he thought would happen - that Jesus would die - did happen. So for him it was all over, and in his conviction that the Messiah was dead he is belligerent in his pessimism. He will not believe unless he can touch the wounded hands and side of his master.

Thomas had to see Jesus to believe in the Resurrection; we don't have that luxury, but have to believe with the eyes of faith in His Resurrection. However, sometimes there is more faith in the person who doubts, than in those who just casually recite the creed but never think about what the words mean. We all of us occasionally need to say "I believe; Lord help my unbelief!" (Mark 9.24)

Lord Jesus Christ,
we may not see You face to face;
or hear Your voice;
and at times our faith can grow dim.
Give us the conviction of things unseen,
and the belief of things unknown,
that we may stand on firmer ground
and our faith become ever stronger.
Amen.