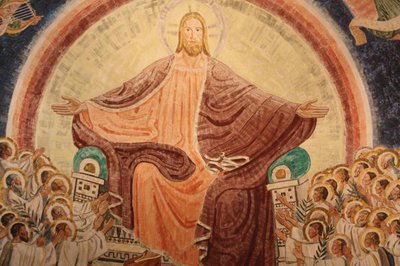 Again Jesus said to them, 'I am going away, and you will search for me, but you will die in your sin. Where I am going, you cannot come.' Then the Jews said, 'Is he going to kill himself? Is that what he means by saying, "Where I am going, you cannot come"?' He said to them, 'You are from below, I am from above; you are of this world, I am not of this world. I told you that you would die in your sins, for you will die in your sins unless you believe that I am he.' They said to him, 'Who are you?' Jesus said to them, 'Why do I speak to you at all?' I have much to say about you and much to condemn; but the one who sent me is true, and I declare to the world what I have heard from him.' They did not understand that he was speaking to them about the Father.

The world sees Christianity as a great joke! Those listening to Jesus in the Temple certainly had absolutely no idea what Jesus was talking about. Today, things are even worse, for our world is ruled by science and by things it can factually prove, and Christianity to many seems a great fairy story.

However, in 2018 (according to the latest figures) Christians formed the biggest religious group by some margin, with 2.3 billion adherents or 31.2% of the total world population. It has encompassed some of the greatest minds that have ever existed; it has produced men and women whom the world considered saints; and still many who are imprisoned or killed for their faith.

So what is our faith? It is that God has been involved with our world from its beginning; that God gave us free-will; that we have found it impossible to obey His laws; that God sent His Son, Jesus, to save us from our sin, through faith in Him; and that His Holy Spirit is at work in our world, today. Just look again at the Creed that we say in our service on a Sunday! When you find it difficult to have faith, hang in there, for billions of others today have faith in God, which is why we say 'We believe'!

Heavenly Father,
sometimes we find it difficult to have
faith in You,
despite our desire to believe.
Help us to hang in there
on the bad days
and rely on the faith
of so many other people;
and enable us to continue
to grow in faith.
Amen.

We use the Nicene Creed for the Communion Service (ie also called the Eucharist or the Mass), and the Apostle's Creed for other services. You might like to look at the words of this Creed, and then at a video about it: