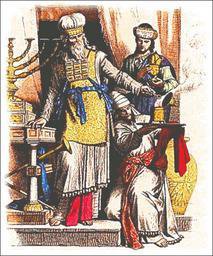 Six days before the Passover Jesus came to Bethany, the home of Lazarus, whom he had raised from the dead. There they gave a dinner for him. Martha served, and Lazarus was one of those at the table with him. Mary took a pound of costly perfume made of pure nard, anointed Jesus' feet, and wiped them with her hair. The house was filled with the fragrance of the perfume. But Judas Iscariot, one of his disciples (the one who was about to betray him), said, 'Why was this perfume not sold for three hundred denarii and the money given to the poor?' .... Jesus said, 'Leave her alone. She bought it, so that she might keep it for the day of my burial. You always have the poor with you, but you do not always have me.

When the great crowd of the Jews learned that he was there, they came not only because of Jesus but also to see Lazarus, whom he had raised from the dead. So the chief priests planned to put Lazarus to death as well, since it was on account of him that many of the Jews were deserting and were believing in Jesus.

The small village (now a town) of Bethany, (or Al-'Ayzariyyah in Arabic) is situated on the eastern slope of the Mount of Olives just outside Jerusalem, and is now under Palestinian control. It would have been easy to take the 3 mile walk into Jerusalem, though the hills are steep. To get there by car today takes over half an hour as the road sweeps around Jerusalem to avoid the huge security walls.

During Holy Week Jesus and his disciples continually walked into Jerusalem coming back at night to stay at Bethany in the house of Lazarus, Martha and Mary. As pilgrims gathered from all around the Roman Empire to celebrate the Passover, the city would almost burst at the seams. The Jewish and Roman authorities could not afford to have any kind of riot occur, as we saw in the Thoughts for 27th March 21 ('The opposition gathers pace: 1'). After the raising of Lazarus the chief priests are now ready to remove Jesus, one way or another.

This story shows us Jesus being anointed. Kings, priests, and prophets were often anointed before for role. Jesus is to be our prophet, priest, and king.

Lord God,
as we travel with You this week
on your journey towards Golgotha
and the cross,
may we not forget
that you took these steps
to offer us eternal life.
Amen.

We see the phrase 'chief priests' in our reading today, so what was the difference between them and the High Priest? You might like to look up this article on the whole subject: