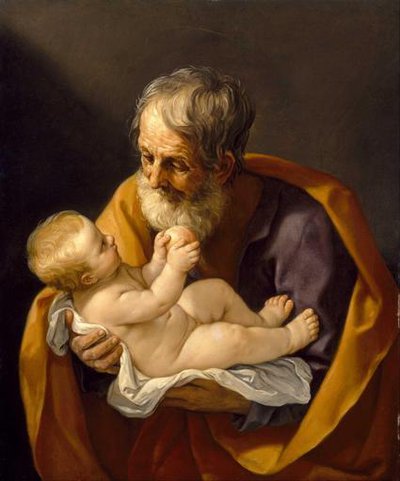 Now the birth of Jesus the Messiah took place in this way. When his mother Mary had been engaged to Joseph, but before they lived together, she was found to be with child from the Holy Spirit. Her husband Joseph, being a righteous man and unwilling to expose her to public disgrace, planned to dismiss her quietly.

But just when he had resolved to do this, an angel of the Lord appeared to him in a dream and said, 'Joseph, son of David, do not be afraid to take Mary as your wife, for the child conceived in her is from the Holy Spirit. She will bear a son, and you are to name him Jesus, for he will save his people from their sins.' ...... When Joseph awoke from sleep, he did as the angel of the Lord commanded him; he took her as his wife.

Today we remember St Joseph, a bit of an odd timing, but I can see one good reason why! Matthew's Gospel tells us the story of Jesus' birth from Joseph's perspective, we don't get the actual birth story, like Luke's gospel, but we hear about what happens before his birth.

A marriage in Jesus' time involved three things: the engagement (often arranged by parents for children); the betrothal (the official bit - couples were now known as husband and wife, and it would require a divorce to separate them); and the marriage (taking place about a year later).

For Mary to be found with child before the marriage was dangerous for her reputation and for her life, since she could be stoned, but Joseph decides to quietly dismiss her. It takes a dream to persuade him otherwise, with an angel appearing to him, to tell him this is God's plan.

Thinking about Joseph today, can we remember one thing about him, and that is his trust in God's message and in His plan for the world. Often we are faced with difficult decisions, but we need to remember to ask God for His help, and then trust that what we do and what happens will be part of His plan for our life.

Heavenly Father,
You called St Joseph to be part
of Your great plan for the world.
May we have confidence in You
and learn to trust in Your plans
for us and for our future.
Amen.