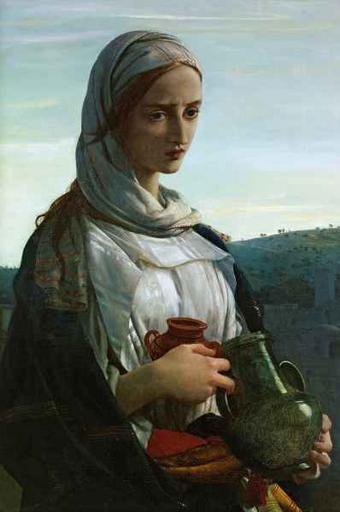 Early on the first day of the week, while it was still dark, Mary Magdalene came to the tomb and saw that the stone had been removed from the tomb. So she ran and went to Simon Peter and the other disciples, the one whom Jesus loved, and said to them 'They have taken the Lord out of the tomb, and we do not know where they have laid him.'

Today we remember Mary Magdalene, a woman with two apparently different histories! Many know her as a penitent prostitute, or sinful woman. She is often portrayed in artwork as semi-naked, even though she has been redeemed. It's a very powerful image, and one that has stuck.

But it doesn't match up with what we know of her. Nowhere in the gospels does it mention that Mary was a sinner, and she seems to have become muddled with two other people. In the 6th century Pope Gregory the Great declared Mary Magdalene had become confused with Mary (sister of Martha) and with the unknown sinner who washed Jesus' feet in Luke's Gospel (and who dried his feet with her unbound hair - a sign of a sinner), and that these stories were about Mary Magdalene, who was a repentant sinner. This was reverses in 1969, and these women were declared not Mary Magdalene.

So what can we say about this Mary? She is sometimes known as Mary of Magdala - a town on the shores of the Sea of Galilee, known for its fishing. She was probably unmarried as she does not bear her husband's name, and she travelled with Jesus and the disciples. Mary was present at three of the most crucial moments in the Gospels: she was there to support the dying Jesus at his crucifixion, along with his mother Mary and with the disciple John; it was she who discovered the empty tomb; and she was also the first person to meet the risen Jesus. She is considered to be a saint by the Catholic Church, the Eastern Orthodox Church, the Anglican Church, and by the Lutheran Churches.

Heavenly Father,
may we have the courage that Mary Magdalene had:
to travel with Your Son through the good and bad times,
and to support Your Son when needed.
May we too go looking for Him,
and when we find Him
may we acknowledge Him
as our Saviour.
Amen.

If you want to look up further references to Mary Magdalene you will find her in these readings from the Gospels:

You might like to look up this list of artwork showing Mary Magdalene, by famous artists. Notice the unbound hair and what it says, and the general confusion about her background.