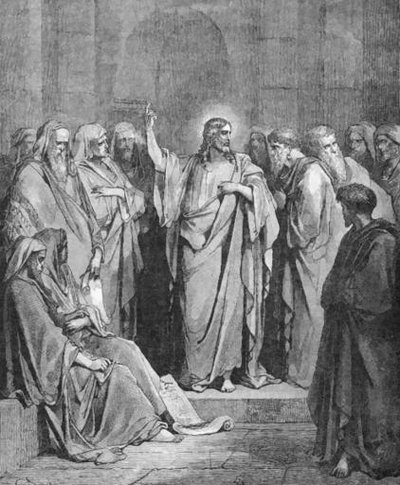 They went to Capernaum; and when the sabbath came, he entered the synagogue and taught. They were astonished at his teaching, for he taught them as one having authority, and not as the scribes, Just then there was in their synagogue a man with an unclean spirit, and he cried out, 'What have you to do with us, Jesus of Nazareth? Have you come to destroy us? I know who you are, the Holy One of God.' But Jesus rebuked him, saying, 'Be silent, and come out of him!' And the unclean spirit, throwing him into convulsions and crying with a loud voice, came out of him.

They were all amazed, and they kept on asking one another, 'What is this? A new teaching - with authority! He commands even the unclean spirits, and they obey him.' At once his fame began to spread throughout the surrounding region of Galilee.

With the speed of an express train Mark continues his Gospel story. He shows Jesus making for Capernaum some twenty miles distant from Nazareth, where he calls his first disciples. Capernaum lies north-east of Nazareth, so we might wonder why he didn't make for Tiberius which had certainly been built in 20 CE. However, it would seem that he might have had relatives in Capernaum, and perhaps it was considered a safer and less Romanised place to start his ministry.

Today there are significant remains of a Synagogue in Capernaum, built later than the time of Jesus. However, it was obviously a place Jesus knew well, for it was here he called his first disciples, and here many of them lived. It would have been completely normal to attend the Synagogue on the Friday after sunset or else on the Saturday. Mark Turnage in an article on 1st century Synagogues points out that the Greek word synagogue could refer to a 'group of people, a community', or 'a building' at this time. Whichever this is, the Synagogue is a place of prayer and teaching, and here in Mark's Gospel we see His first miracle, what we might call an 'exorcism miracle', showing his power over good and evil.

I wonder, do we go to church each Sunday? Do we expect take our concerns there? Do we expect an answer to our prayers, and for the power of God to be at work today?

Lord God,
may we go each week to Church
as naturally as You did to the Synagogue.
May we expect to to be heard
as did the sick so long ago.
May we too seek to be healed,
and to go out refreshed and renewed
to put Your words into action.
Amen.

You might like to look at these sites to find out more about 1st century Synagogues, and the first miracle in Mark's Gospel: