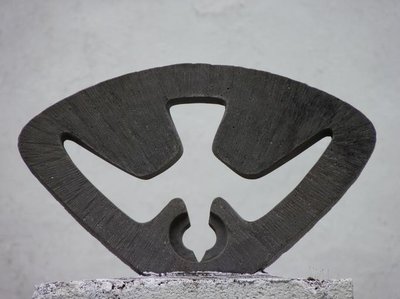 While Jesus was at Bethany in the house of Simon the leper, as he sat at the table, a woman came with an alabaster jar of very costly ointment of nard, and she broke open the jar and poured the ointment on his head. But some were there who said to one another in anger. 'Why was the ointment wasted in this way? For this ointment could have been sold for more than three hundred denarii, and the money given to the poor.' And they scolded her. But Jesus said, 'Let her alone; why do you trouble her? She has performed a good service for me.... she has anointed my body beforehand for its burial.'

In the Gospels there are four different accounts of Jesus being anointed - on his feet or his head. Ceremonial anointing in the Hebrew scriptures involved rubbing or pouring sacred oil onto someone or something to indicate that God had chosen them and set them apart for a holy purpose. So kings, priests and prophets were anointed. David was anointed by Samuel when he was a young boy (1 Samuel 16.13) and Elijah was sent to anoint Elisha as his successor (1 Kings 19.16). Honoured guests were anointed, as well as animals killed for the Passover meal, since they too were set aside for a specific holy task, and the oil itself was carefully blended with spices according to a specific formula (Exodus 30.31-38).

At the beginning of his ministry in Capernaum Jesus read the text from the prophet Isaiah that prophesied that God would send someone to save his people, and that he would be anointed: 'The Spirit of the Lord is upon me, because he has anointed me to bring good news to the poor.' (Luke 4.18) We take these words as did Jesus, as referring to himself.

Nearly, 2,000 years later I was anointed with oil in Gloucester cathedral at my ordination as a deacon, and later as a priest. But it's not only deacons and priests that are anointed. All Christians can think of themselves as being anointed - anointed through the Gift of the Holy Spirit at our baptism and confirmation, and which God has bestowed on His Church.

Lord God,
You were anointed by the women
to prepare You for Your ministry
and for Your death,
and we thank You that
we too are anointed by the Holy Spirit,
for the work You have given us to do
in Your Church and in the world.
Amen.