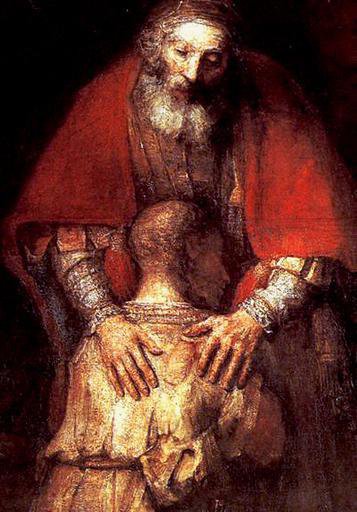 Jesus said, 'There was a man who had two sons. The younger of them said to his Father, "Father, give me the share of the property that will belong to me." So he divided his property between them.

A few days later the younger son gathered all he had and travelled to a distant country, and there he squandered his property in dissolute living. When he had spent everything, a severe famine took place throughout that country, and he began to be in need. So he went and hired himself out to one of the citizens of that country, who sent him to his fields to feed the pigs. He would gladly have filled himself with the pods that the pigs were eating, and no-one gave him anything. But when he came to himself he said, "How many of my father's hired hands have bread enough and to spare but here I am dying of hunger! I will get up and go to my father, and I will say to him, 'Father, I have sinned against heaven and before you; I am no longer worthy to be called your son; treat me like one of your hired hands.' " So he set off and went to his father.

But while he was still far off, his father saw him and was filled with compassion; he ran and put his arms around him and kissed him......the father said to his slaves, "Quickly, bring out a robe - the best one - and put it on him; put a ring on his finger and sandals on his feet. And get the fatted calf and kill it, and let us eat and celebrate; for this son of mine was dead and is alive again; he was lost and is found!" And they began to celebrate.

*Picture: 'The Prodigal Son' by Remembrandt.

This wonderful parable, also known as The Prodigal Son, is one of three stories in Chapter 15 of Luke's Gospel about things that are lost. If you've ever done something truly awful and had to return home to confess then you probably understand how the son feels after his mad action in spending all his inheritance. There is no other solution, he has to go home, but what will his father say, will he refuse to acknowledge him or let him in the house, and will he send him away? The lad has no idea, and his feet drag as he gets nearer to home, he cannot bear to think of what will happen. But to his amazement before he can see his home there is his father coming towards him, arms outstretched to welcome him as the returning hero instead of the returning disappointment!

Throughout our lives we let God down, we may not make such gigantic mistakes as the young son, but we fail to live up to God's standards - we do not love Him or our neighbour as we should. There isn't a day goes by that we fail Him, yet like the father in the story, He is there with open arms to welcome us back when we admit our mistakes and return to Him.

Heavenly Father,
we thank you that You care for us;
that You invite us to be Your children;
that You sent Your Son to be our Saviour;
that You welcome us home when we return
to admit our mistakes and ask Your forgiveness.
Amen.