Wednesday, 14th October 2020: The life and death of Esther John 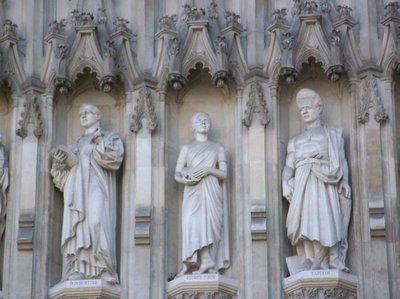 Is not this the fast that I choose:
to loose the bonds of injustice,
to undo the thongs of the yoke,
to let the oppressed go free,
and to break every yoke?
Is it not to share your bread with the hungry,
and bring the homeless poor into your house;
when you see the naked, to cover them,
and not to hide yourself from your kin?

Then your light shall break forth like the dawn,
and your healing shall spring up quickly;
your vindicator shall go before you,
the glory of the Lord shall be your rearguard.

Above the west entrance to Westminster Abbey there is a statue to the modern missionary and martyr, Esther John. Today we remember her life and death.

Esther was born Qamar Zia into a Muslim family in 1929. When she was 17 she attended a Christian school and was influenced by the faith of one of her teachers, and by the book of Isaiah. When the partitioning of India occurred she moved with her family to Pakistan, and here she met a missionary, Marian Laugesen in Karachi. Her faith grew in secret, and she was forced to flee when it looked as though she would be forced to marry a Muslim husband.

She worked for some time in an orphanage in Karachi, and took the name Esther John. In September 1956 she entered the United Bible Training Centre in Guranwala, to train as a teacher., and in 1959 moved to Chichawatni to live with American Presbyterian missionaries. During this time she worked as a missionary in the villages, taught women to read as well as working with them in the cotton fields. Those who knew her reported that at times her relationship with her family appeared calm, but at other times, fraught.

On 2nd February 1960 Esther John was found dead in her bed. She had been brutally killed. No-one has ever been charged. Her vocation to work as a Christian, had led to her death!

Lord God,
may we learn from the life
of Esther John,
to be calm under pressure,
to remain true to our calling,
and ever listen to Your call
to be Your workers in the
mission field -
that is, this world.
Amen.