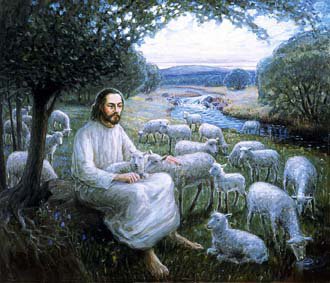 Jesus said, 'The works that I do in my Father’s name testify to me; but you do not believe, because you do not belong to my sheep. My sheep hear my voice. I know them, and they follow me. I give them eternal life, and they will never perish. No one will snatch them out of my hand. What my Father has given me is greater than all else, and no one can snatch it out of the Father’s hand. The Father and I are one.’

Many animals use their sense of smell to know their friends and their enemies, dogs in particular as we know, have a vastly superior sense of smell than we do ourselves. We tend to use our eyesight, and also our hearing to identify others. When my husband Adrian was well into the realms of his own land with dementia I could still bring him out of his world and back into mine by saying his name. He might hesitate for a moment, but then he would smile as he recognised it was me. My voice that had spoken to him for over 51 years - my voice that had teased him; called him pet names; murmured words of love; whispered comfort when he was sick; oh yes, and argued with him - that voice could still break through his confusion. It was finally to be the last voice that he recognised.

Jesus said to those in the Temple who disputed with him: 'My sheep hear my voice. I know them, and they follow me'. It is our Lord who comforts us, who loves us, and who calls us to His side. Sometimes that voice is heard in the silence of our hearts, or in the raging of the wind, or in the quiet of prayer time, or in precious moments at the Eucharist. Lest we be in doubt that it is He who calls, open your heart to him, and quietly murmur "Come, Lord, come!"

Maranatha! Come, Lord come!
You came into our broken world,
to repair the relationship with the Father;
You came as a fragile baby
to be cared for by human parents;
You came as one under authority
unil the time was right;
You came to die for us
that we might be reconciled
to our Heavenly Father.
May we hear Your voice again.
Come, Lord come!
Amen.