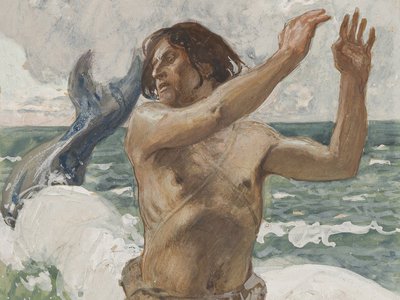 But the Lord hurled a great wind upon the sea, and such a mighty storm came upon the sea that the ship threatened to break up. Then the mariners were afraid, and each cried to his god. They threw the cargo that was in the ship into the sea, to lighten it for them. Jonah, meanwhile, had gone down into the hold of the ship and had lain down, and was fast asleep. The captain came and said to him, 'What are you doing sound asleep? Get up, call on your god! Perhaps the god will spare us a thought so that we do not perish'.

The sailors said to one another, 'Come, let us cast lots, so that we may know on whose account this calamity has come upon us'. So they cast lots, and the lot fell on Jonah.....He said to them, 'Pick me up and throw me into the sea; then the sea will quieten down for you; for I know it is because of me that this great storm has come upon you'.

God spoke to Jonah - he had absolutely no doubt it was God, and he didn't like the message. Nineveh was the capital of the Assyrian Empire, and Jonah knew that these pagan people were dangerous. Assyria was at the height of her power between the 8th and 7th century BCE, and she threatened all the surrounding nations, not least Israel. As well as this her army was renowned for its cruelty. The Jewish writer Hayyim Lewis says, 'The Assyrians were the Nazi storm-troopers of the ancient world.' So while Jonah had no intention of obeying God's call, for he would certainly be killed. Instead he proceeds to take a boat in the opposite direction to get away from God.

There are some interesting things about this chapter. First, the word 'down' occurs twice, and we remember that for the ancient world 'up' is good and 'down' not good (today we see the same thing: 'upmarket', 'up to heaven' and 'downscale' and 'down to hell'); then we see all the crew praying to their gods; but after they have thrown Jonah overboard they pray to 'the Lord'. While Jonah won't pray, the pagan sailors turn to His God, and ask for help. It will take Jonah three days in the belly of the fish before he turns to God in prayer.

The message is that you cannot escape from God if He calls you for a task. He will keep calling you in many different ways. It is like an everlasting pin-prick and it won't go away, as Jonah was to discover.

Lord God,
all too often we act like Jonah:
we ignore Your call;
we pretend we haven't heard it;
we brush aside the feeling that we should act;
we turn around and go the other way.
Help us to listen out for Your voice:
through our conscience;
through the words of others;
or through that found in our Bible.
May we hear and act upon Your message
no matter how hard it may be.
Amen.

Read the first two chapters of Jonah, and look at the difference between Jonah and the seamen: