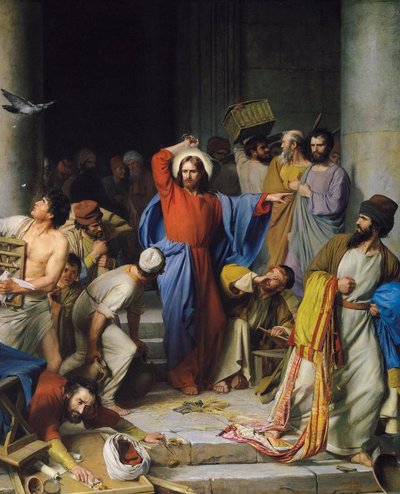 Jesus entered the temple and began to drive out those who were selling things there; and he said, 'It is written, "My house shall be a house of prayer"; but you have made it a den of robbers.'

Every day he was teaching in the temple. The chief priests, the scribes, and the leaders of the people kept looking for a way to kill him; but they did not find anything they could do, for all the people were spellbound by what they heard.

During 40 years of ministry I have had a number of people object to selling things in the parish church, whether it was christian prayer cards or a sale of work. They usually quoted Jesus' action in driving out those who were selling in the temple. But is this what Jesus meant when he swept into the temple and declared "My house shall be a house of prayer, but you have made it a den of robbers"?

I think this was more an active parable, and Jesus was making three points:

Firstly, the merchants (and the priests who allowed it) sold the animals and birds for sacrifice at inflated prices. The theologian Barclay says "A pair of doves could cost as little as 4p outside the Temple and as much as 75p inside the Temple."

Secondly, visitors had to change their money into Temple money, and were frequently fleeced by the money-changers.

Thirdly, all this took place in the courtyard of the gentiles - a place where non-Jews came to pray. Jesus wanted the Temple to be a place for all peoples, and all this noise and bustle in the courtyard meant that it was impossible for them to worship.

Lord Jesus,
You sought to fight injustice
wherever it occurred,
even in Your Father's temple.
Help us to combat injustice ,
and to care for the underdog,
the neglected, and the outsider,
wherever we find them.
Amen.