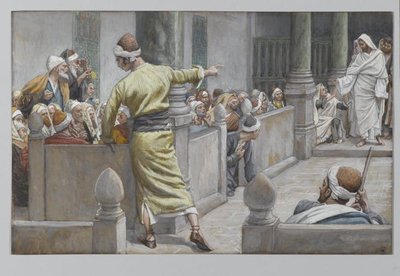 Now Jesus was teaching in one of the synagogues on the sabbath. And just then there appeared a woman with a spirit that had crippled her for eighteen years. She was bent over and was quite unable to stand up straight. When Jesus saw her he called her over and said, 'Woman, you are set free from your ailment.' When he laid his hands on her, immediately she stood up straight and began praising God.

But the leader of the synagogue, indignant because Jesus had cured on the sabbath, kept saying to the crowd, 'There are six days on which work ought to be done; come on those days and be cured, and not on the sabbath day.' But the Lord answered him and said, 'You hypocrites! Does not each of you on the sabbath untie his ox or his donkey from the manger, and lead it away to give it water? And ought not this woman, a daughter of Abraham whom Satan bound for eighteen long years, be set free from this bondage on the sabbath day?'

Anyone affected by arthritis or something similar, will know the continuous pain as the body becomes more affected by the disease. Those bent over have to cope with pain from their back and their neck as the way they stand is affected. Conditions like 'Dowager's Hump' or Ankylosing Spondylitis come to mind, and we see those suffering getting smaller as their body becomes twisted. Jews believed these conditions were caused by sin, but we see in this story from Luke's Gospel that Jesus says nothing about sin, he just 'sets her free from her ailment'. Many believed that healing was work, and broke the Sabbath laws. Jesus calls them hypocrites!

Jesus sees the woman as she enters the synagogue. As a teacher he is sitting, with others around him. His words to the woman, in their original language, are those used in a Court, to free someone. Then he lays his hands on her to complete the healing.

The attendant in the synagogue is indignant. He cannot see why the woman cannot wait for another day to be healed, but Jesus is not prepared to put rules before the woman who is in pain. We too need to be careful we don't try to care more for rules than we care for people. The rule of Love should apply first and foremost in everything we do!

Lord God,
may we have compassion
for all Your people,
whoever they are.
May we live by Your rule of Love,
for friends and strangers alike,
and be prepared to help where possible.
Amen.

The Bible says 'hypocrisy' is a sin. If you would like to find out more look up this site: