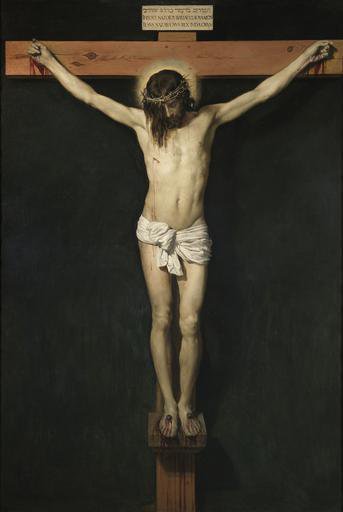 Then Pilate took Jesus and had him flogged. And the soldiers wove a crown of thorns and put it on his head, and they dressed him in a purple robe. They kept coming up to him, saying, 'Hail, King of the Jews!' and striking him on the face......

Now it was the day of Preparation for the Passover, and it was about noon. Pilate said to the Jews, 'Here is your King!' They cried out, 'Away with him! Away with him! Crucify him!' Pilate asked them, 'Shall I crucify your King?' The chief priests answered, 'We have no king but the emperor.' Then Pilate handed him over to them to be crucified.

Today we remember that Jesus was crucified, that those who hated him but thought they were serving God (who spent their days studying the scriptures and waiting for the coming Messiah) killed God's Son. As a subject-nation they could not order his death so they take him to the Romans. But Pilate is loth to do so, and only when a riot is likely to occur does he agree to their demand to crucify Jesus.

We can see how the chief priests and their supporters seem to have gone off course. But we too struggle with change. Christians have always had to listen to God's promptings through the Holy Spirit. At one time many of us only worshipped using 17th century language in church, and it didn't seem odd (in fact I loved it); divorce was something unusual and no woman with an illegitimate child could join the Mothers' Union (which I also loved!); then women priests appeared (and even I wasn't sure, initially); and so it goes on.

Our God engages with His people through His Holy Spirit, enabling them to grow more like Him. Because Jesus chose the path that He did, he has brught us back to our loving Heavenly Father. So today may be a day of sadness, but it is also one of overwhelming thanks.

Lord Jesus,
today our sadness at
the manner of Your death,
is tempered by our realisation
that You loved us so much
that You chose to die for us.
May we never forget Your sacrifice,
and seek to learn more of
Your will for our lives.
Amen.

This hymn really says it all - 'There is a green hill far away' sung by Kings College, Cambridge: