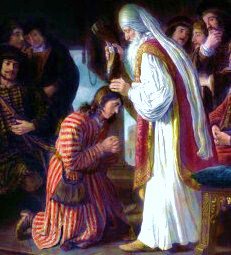 The Lord said to Samuel, 'How long will you grieve over Saul? I have rejected him from being king over Israel. Fill your horn with oil and set out; I will send you to Jesse the Bethlehemite, for I have provided for myself a king among his sons.....Take a heifer with you, and say, "I have come to sacrifice to the Lord." Invite Jesse to the sacrifice, and I will show you what you shall do; and you shall anoint for me the one whom I name to you....

Then Samuel took the horn of oil and anointed David in the presence of his brothers; and the spirit of the Lord came mightily upon David from that day forward.

This is a wonderful story explaining how David was chosen by God to be king of Israel. There are elements of a 'fairy tale' in it, as each brother goes before the prophet Samuel before the youngest, David, is called from the sheep to be anointed king-in-waiting.

We need to notice two important things about this story:

God calls the unexpected to do His will, but we need to keep an ear out for that call for it may come to us, even though we may feel unworthy of such a call!

Heavenly Father,
You see us as we really are:
whether our hearts and not
just out outward appearance
are committed to You.
Help us to listen
to Your instructions,
and obey your commands
to love You and all people.
Amen.

You might like to read the whole story about the calling of David, and the beginning of his relationship with King Saul: