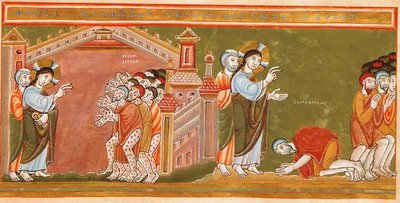 On the way to Jerusalem Jesus was going through the region between Samaria and Galilee. As he entered a village ten lepers approached him. Keeping their distance, they called out, saying 'Jesus, Master, have mercy on us!'

When he saw them, he said to them. 'Go and show yourselves to the priests.' And as they went they were made clean. The one of them, when he saw that he was healed, turned back, praising God with a loud voice. He prostrated himself at Jesus' feet and thanked him. And he was a Samaritan. Then Jesus asked, 'Were there not ten made clean? But the other nine, where are they? Was none of them found to return and give praise to God except this foreigner?' Then he said to him, 'Get up and go on your way; your faith has made you well.'

*Picture: Coedexaureus - The cleansing of the ten lepers

When I looked at this miracle in Luke's Gospel, the words 'social distancing' came into my mind when thinking about the lepers. They have heard that Jesus heals those who are sick and come to find him, but they 'keep their distance' and shout to him for mercy. Jesus doesn't say he has healed them but sends them to the priest, who can then declare them free from the disease, and allow them to re-enter society.

A look at a map of Israel in the time of Jesus will show that to go from Galilee in the north of Israel to Jerusalem a traveller must pass through Samaria. Samaritans were hated by the rest of the Jewish population because they weren't considered to be true Jews. The Assyrians had taken most of the population into exile in the past and filled the then capital city, Samaria, with foreign peoples who married those Jews who remained in the land. Subsequently shunned from building the new Temple in Jerusalem they built their own on Mount Gerazim. It is noticeable that Jesus does not have contempt for Samaritans. He calls the man a foreigner, but shows great compassion for him.

The Samaritan's immediate response to his healing is to praise God and to thank Jesus for healing him of the dreadful disease. When we, or friends or family, are healed we usually thank the medical staff, but do we forget to praise God and than Him for the part He has played in the healing?

Heavenly Father,
forgive us for the times we have
forgotten to praise You and to thank You;
for the times when we believed
a healing was all due to human intervention;
and when we are grateful for the work
of the National Health Service then
help us also remember to thank You
for answering the countless prayers we made.
Amen.