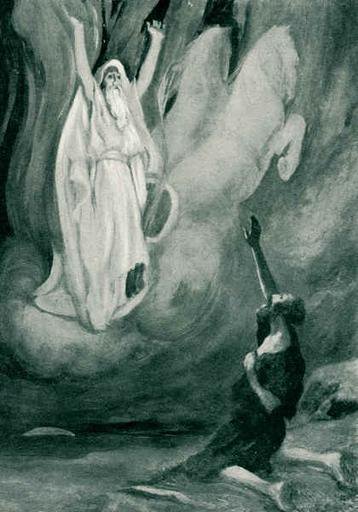 Now when the Lord was about to take Elijah up to heaven by a whirlwind, Elijah and Elisha were on their way from Gilgal. Elijah said to Elisha, 'Stay here, for the Lord has sent me as far as Bethel,.' But Elisha said, 'As the Lord lives, and as you yourself live, I will not leave you.' So they went down to Bethel. The company of prophets who were in Bethel came out to Elisha, and said to him, 'Do you know that today the Lord will take your master away from you?' And he said, 'Yes, I know; keep silent.'

As they continued walking and talking, a chariot of fire and horses of fire separated the two of them, and Elijah ascended in a whirlwind into heaven. Elisha kept watching and crying out, 'Father, father! The chariots of Israel and its horsemen!' But when he could no longer see him, he grasped his own clothes and tore them in two pieces,

The passage has had to be cut, but it's worth reading in its whole, because we see Elisha desperate not to let Elijah go. He follows him all round the country. Elijah has been a prophet in Israel during the lives of three kings, but as Elijah is taken up into heaven his gifts will pass on to his successor, Elisha, and the first thing that he will do is also to strike the river Jordan and pass over it on dry land.

We have seen episodes in Elijah's life recently, and we now come to the end of his earthly story. His name meant 'The Lord is my God', and his significance cannot be under-estimated. He sought to bring the people back to God, challenging them to leave pagan gods like Baal. He was a man who heard the voice of God and lived his life in obedience to Him. He was a man of prayer, and although afraid, had courage. In the New Testament the disciples were later to see him standing alongside Jesus and Moses. He would have been Elisha's whole world, and the new prophet was desperate not to let him go, yet it's time for Elisha to take up the challenge of leading the people.

This story speaks to me powerfully. How often have I seen families desperate, like Elisha, to cling on to their loved ones as they approach the end of life. They will assure them they are getting better, that they have a future here with them, when it's obvious to everyone else that this will not happen. The greatest of gifts we can offer a loved one who is dying is to be brave and give them permission to leave us, perhaps to say something like: "We love you, but it is ok to leave now!"

Heavenly Father,
help us to accept that we have a finite life
here on earth,
that death is the only sure thing,
for all who are born must die.
Teach us how to ease the passage
of loved ones into that other world
that You teach us awaits all Your people.
Give us the comfort of knowing
that a life well lived with You
will be rewarded.
Amen.

The cartoon video of the whole history of Elijah is well worthy watching, but you will need 20 minutes or so. It starts by a quick look at other stories to explore, but then gets to the video on Elijah. It uses speech and singing (with Bryn Turvil as Elijah):