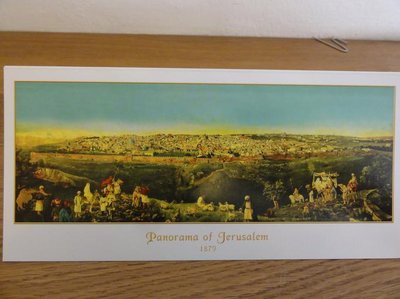 On the holy mountain stands the city he founded;
the Lord loves the gates of Zion
more than all the dwellings of Jacob.
Glorious things are spoken of you,
O city of God....

And of Zion it shall be said,
'This one and that one were born in it;
for the Most High himself will establish it.'

Psalm 87 mentions the word 'Zion' which we find in hymns, and sometimes as a name for a church: Zion was originally the eastern of the two hills on which king David built his great city of Jerusalem, and where God's Temple was established. Having captured the city in the 10th century BCE it became his royal capital. But 'Mount Zion' often means the whole city of Jerusalem rather than the hill, and it's often found in the book of Isaiah, where the prophet says that Mount Zion is the place where the God of Israel lives (Isaiah 8.18). Sometimes the city is shown as a woman 'as the daughter of Zion', and when the people are exiled to Babylon it is for Zion that they yearn to return.

The word Zion is not much used in the New Testament, but is often used in hymns as a symbol for the place where God reigns today - that is heaven itself - as we can see in this hymn written by John Newton in the 18th century, and which is either sung to a Croatian folk tune, or alternatively to 'Abbots Leigh:

'Glorious things of thee are spoken
Zion city of our God;
he whose word cannot be broken
formed thee for his own abode.'

Heavenly Father,
whose reigns in Zion
as King of the whole universe,
may we look forward
to a time when all the faithful
are gathered into your heavenly city,
the Holy city of Zion.
Amen.