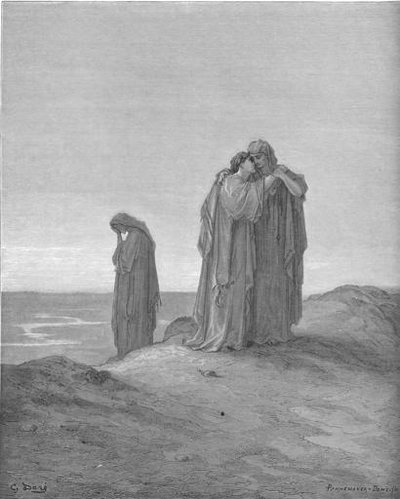 In the days when the judges ruled there was a famine in the land, and a certain man of Bethlehem in Judah went to live in the country of Moab, he and his wife and two sons.... But Elimelech, the husband of Naomi, died, and she was left with her two sons. These took Moabite wives; the name of one was Orphah and the name of the other Ruth. When they had lived there for about ten years, both Mahlon and Chilion also died, so that the woman was left without her two sons or her husband.

Then she started to return with her daughters-in-law from the country of Moab, for she had heard in the country of Moab that the Lord had had consideration for his people and given them food....But Naomi said to her two daughters-in-law, 'Go back each of you to your mother's house. May the Lord deal kindly with you, as you have dealt with the dead and with me....Orphah kissed her mother-in-law, but Ruth clung to her..and said,

'Do not press me to leave you or to turn back from following you! Where you go, I will go; where you lodge, I will lodge; your people shall be my people, and your God my God. Where you die, I will die - there will I be buried. May the Lord do thus and so to me, and more as well, if even death parts me from you!'

The time of the Judges was a difficult time, with no Kings, but men and women raised to deal with specific situations, and when a famine occurs Elimelech and his wife, Naomi, and their two sons leave Bethlehem and travel to the pagan land of Moab. To do this they leave God's Promised Land, take the dangerous track to Jericho, cross the Judean wilderness near the Dead Sea, and then the Jordan River, into the land of Moab. Years later her husband and sons die, and Naomi decides to return to Bethlehem having heard that God has provided food for his people. Perhaps she also feels guilty at leaving the place God has established for his people.

What makes this tiny book memorable is Ruth's declaration. It would have been natural for the younger women to return to her paternal home and find another husband. But Ruth has seen something in this strange God and prefers to stay with her mother-in-law, who as a widow can offer her nothing, for she has no husband or son to support her. But Ruth declares she will follow her wherever she goes, she will make the God of Israel her God and reject her own Moabite gods.

Others should be able to look at our life and say "I want your God to be my God!", but only total commitment and complete sincerity in our faith, will win others for Christ.

Lord God,
may our faith shine out from our life
in everything we do.
Through it may others
be attracted to You,
and commit themselves to Your ways.
Amen.