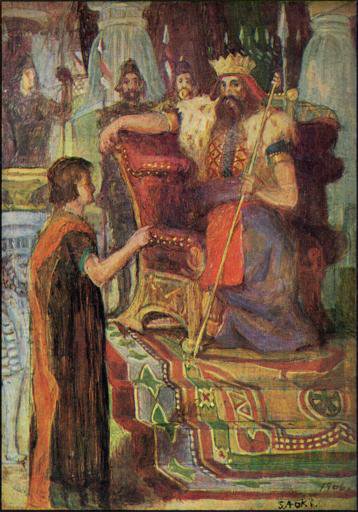 Nebuchadnezzar dreamed such dreams that his spirit was troubled and his sleep left him. So the king commanded that the magicians, the enchanters, the sorcerers, and the Chaldeans be summoned to tell the king his dreams..... He said, 'This is a public decree, if you do not tell me both the dream and its interpretation, you shall be torn limb from limb and your houses will be laid in ruins'......

The Chaldeans answered the king, 'There is no-one on earth who can reveal what the king demands! ....The thing that the king is asking is too difficult, and no-one can reveal it to the king except the gods, whose dwelling is not with mortals.'

Because of this the king flew into a rage and commanded that all the wise men of Babylon be destroyed. The decree was issued, and the wise men were about to be executed; and they looked for Daniel and his companions, to execute them. Then Daniel went to his home and informed his companions....and told them to seek mercy from the God of heaven.

Then the mystery was revealed to Daniel in a vision at night, and Daniel blessed the God of Heaven.

Daniel and his companions are about to die. Dragged off to live in Babylon from their homeland in Israel, and trained to work in the court, there is no way they can survive, they cannot possibly reveal to the king his dream and interpretation. Their first thought might be to disappear quickly, but no they turn immediately to God. He is their only help!

Does our confidence in God mean that we turn to Him immediately when trouble strikes?

Almighty God,
our Heavenly Father,
give us the faith
to turn to You immediately
when trouble strikes,
and to know instinctively
that You are our Saviour.
Amen.