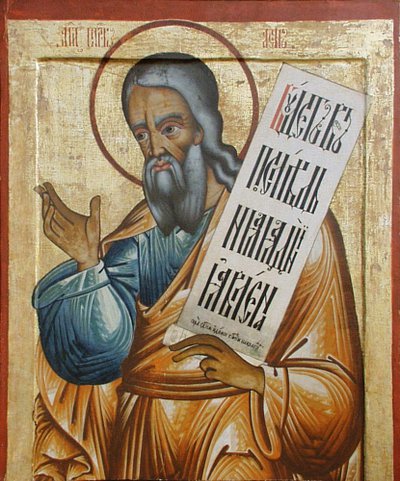 The Lord called me before I was born,
while I was in my mother's womb he named me.
He made my mouth like a sharp sword,
in the shadow of his hand he hid me;
he made me a polished arrow,
in his quiver he hid me away.
And he said to me, 'You are my servant,
Israel, in whom I will be glorified.'...

And now the Lord says,
who formed me in the womb to be his servant,
to bring Jacob back to him,
and that Israel might be gathered to him...
'I will give you as a light to the nations,
that my salvation may reach to the
ends of the earth.'

The words above are part of the second 'Servant Song' from Isaiah. There are five of these Songs and we might have heard their words in Handel's 'Messiah'. Phrases like 'All we like sheep have gone astray', and 'He was despised and rejected'. But before we look at how we interpret these prophecies today, let us look back.

We're not quite sure whether the book of Isaiah was written by one two people, but these Songs seems to come from around 740 BCE onwards, during the last days of King Hezekiah and possibly into the reign of the evil King Manasseh. The prophet preached unsuccessfully to the southern kingdom of Judah, and could see the way things were going. True to his expectation the Babylonians did invade in 587 BCE, destroyed the Temple, sacked Jerusalem, and carried the people off into exile for 70 years. Isaiah prophesies this and looks further ahead towards a time when Jerusalem might be restored. For him this would probably have been the rebuilding of the Temple under Ezra and Nehemiah.

Now fast forward 500 years to the time of Jesus. The country is under Roman control and the people are looking for a Saviour - a servant of the Lord - or Messiah. When Jesus stands up in the Temple in Capernaum and reads from the book of Isaiah, he claims that this prophecy has been fulfilled in their presence (Luke 4.21) - that he will be 'a light to the nations', and that effectively he is the Messiah. The people were shocked, since they were mostly expecting a warrior king to save them, not a carpenter's son and an itinerant preacher.

Fast forward again 2,000 years. Today, we believe that Jesus did come as a 'light to the nations' so that God's salvation might 'reach to the end of the earth.' But for God's Kingdom to be complete we need to help take this message of a loving God to those around us!

The Servant Songs in Isaiah can be found in: