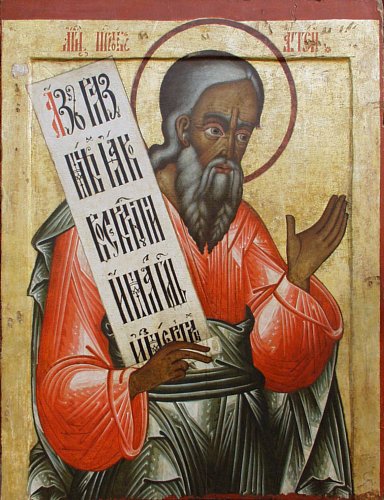 Thus says the Lord of hosts: Consider how you have fared. Go up to the hills and bring wood and build the house, so that I may take pleasure in it and be honoured, says the Lord.

Today we skip forward from Elijah's time (yesterday's Thoughts), to the year 520 BCE in the Hebrew Scriptures to the words of the Prophet Haggai. He gave four message to the people, with actual dates, and unlike other prophets the people listened to his words and acted! The time is 18 years after their return from exile in Babylon, but things were not going well. Humbled by their capture and exile they had returned with hope to rebuild God's Temple, but came up against such opposition that they had given up. (See https://www.biblegateway.com/passage/?search=Ezra+4.24&version=NRSVA) Now they are short of food, clothing, and shelter. Haggai argues that the reason for this is that they have not rebuilt God's shelter.

His words encourage the people of Judah to finish building the Temple and to have hope that God would bless them in the return. From being self-centred, and only concerned with their own well-being, the people became God-centred, returning to worship Him once again. They put God back into the centre of their lives.

Some years ago my elder son spent a year working on a new Christian project in Peru. The first task for the Anglican Missionary Society was to build the church, then an orphanage and school (for the many homeless children in the area), then a seminary to train clergy. The order of work was quite clear, and a few months later all was up and running, and a thriving congregation existed. Indeed they were soon knocking out walls to create a bigger church. Worship came first!

Lord God,
when the daily chores
and concerns of life
get in the way,
help us to remember
that worship of You
comes first.
Amen.