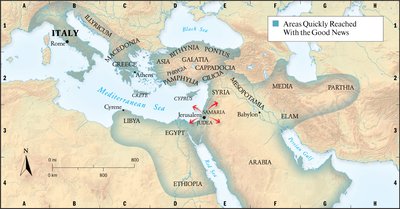 That day a severe persecution began against the church in Jerusalem, and all except the apostles were scattered throughout the countryside of Judea and Samaria. Devout men buried Stephen and made loud lamentation over him. But Saul was ravaging the church by entering house after house; dragging off both men and women, he committed them to prison.

Now those who were scattered went from place to place, proclaiming the word. Philip went down to the city of Samaria and proclaimed the Messiah to them. The crowds with one accord listened eagerly to what was said by Philip, hearing and seeing the signs that he did, for unclean spirits, crying with loud shrieks, came out of many who were possessed; and many others who were paralysed or lame were cured. So there was great joy in that city.

After the death of Stephen, the Jews whip up anger against all those in Jerusalem who have been followers of Jesus, and we find them scattered throughout the area. Their primary adversary is Saul. He is determined that no heretics should exist to undermine the Law of Moses. However, he himself will soon undergo a transformation, and as Paul (his Roman name) will become one of the strongest advocates of Jesus as the Son of God who came to save His people.

Up to this point those who believe in Jesus have not started to take the Gospel news to the wider world. After receiving the power of the Holy Spirit they have stayed in Jerusalem*, but now with persecution things change. We hear that Philip goes to Samaria. Philip is one of the men chosen, along with Stephen, to carry out pastoral work within the new church (Acts 6.5). It's interesting that he takes the message here for Samaritans are hated by most Jews since the time they were conquered years before by the Assyrians who took away their leaders and then settled pagans in the country. Added to this the Samaritans had the temerity to set up a temple to rival that in Jerusalem. Perhaps Philip went to there because of Jesus' experience with the woman at the well (John 4).

Whatever the reason for Philip to go to Samaria, it took persecution to make him take the Gospel to these outsiders. We are not persecuted, but what will it take us to spread the word of God?

* The Lectionary gives us this reading ahead of time, since the disciples don't receive the Holy Spirit until Pentecost - some weeks to go yet!

Lord Jesus Christ,
Your servant Philip took Your word
to those who were considered outsiders
and told them about You
and about Your Heavenly Father's plan
for His people.
Give us the courage
to spread the Christian message
to our world even when they ridicule us,
or do not want to hear our witness.
Amen.

Here's an amazingly exciting animated map showing the spread of Christianity and other world religions from the time of Christ to 2015 CE. See how the religions grow and wane!