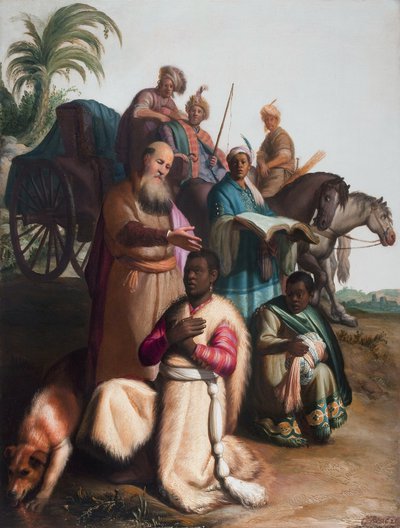 Then an angel of the Lord said to Philip, ‘Get up and go towards the south to the road that goes down from Jerusalem to Gaza.’ (This is a wilderness road.) So he got up and went. Now there was an Ethiopian eunuch, a court official of the Candace, queen of the Ethiopians, in charge of her entire treasury. He had come to Jerusalem to worship and was returning home; seated in his chariot, he was reading the prophet Isaiah. Then the Spirit said to Philip, ‘Go over to this chariot and join it.’ So Philip ran up to it and heard him reading the prophet Isaiah. He asked, ‘Do you understand what you are reading?’ He replied, ‘How can I, unless someone guides me?’ And he invited Philip to get in and sit beside him.

Then Philip began to speak, and starting with this scripture, he proclaimed to him the good news about Jesus. As they were going along the road, they came to some water; and the eunuch said, ‘Look, here is water! What is to prevent me from being baptized?’ He commanded the chariot to stop, and both of them, Philip and the eunuch, went down into the water, and Philip baptized him. When they came up out of the water, the Spirit of the Lord snatched Philip away; the eunuch saw him no more, and went on his way rejoicing. But Philip found himself at Azotus, and as he was passing through the region, he proclaimed the good news to all the towns until he came to Caesarea.

We have seen Philip the Evangelist yesterday, and also two year's ago (click on ''Philip the Evangelist" above), and we shouldn't confuse him with Philip the Apostle (one of the disciples). After Philip goes to Samaria we learn that an angel (or perhaps the Holy Spirit) tells him to go to the road leading to Gaza, south of Jerusalem. The Ethiopia mentioned was not the modern-day one, but Nubia which stretched from the southern edge of Egypt and covered what is today's northern and central Sudan. 'Candace' isn't a name, but a title given to the mother of the Nubian king and it was she who ruled the nation, the king being thought too exalted as the son of the sun to do such a thing. The eunuch was possibly a proselyte or "god-fearer", and Philip hears what he is reading, rather than sees it, for most people would customarily read aloud.

Philip promptly explains the passage of Isaiah (53.7-8) to the Ethiopian - that the man referred to is Jeus Christ, and he asks to be baptised. An ancient source adds another verse here with Philip saying "If you believe with all your heart, you may," and the man answering says "I believe that Jesus Christ is the Son of God." With this the man then returns to his homeland, and spreads the news. By the 4th century Christianity was to be his country's official religion!

How confident would we be today to respond as the Ethiopian did - to say "I believe that Jesus Christ is the Son of God!"?

Lord Jesus Christ,
help us to be as confident
as the Ethiopian eunuch
that You are the Son of God;
and help us to learn more about You
so that we can teach others
about our faith.
Amen.