Reading : Verses from Jonah, Chapters 3 and 4 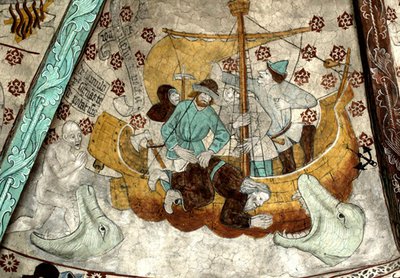 And the people of Nineveh believed God; they proclaimed a fast, and everyone, great and small, put on sackcloth.....When God saw what they did, how they turned from their evil ways, God changed his mind about the calamity that he had said he would bring upon them.....

But this was very displeasing to Jonah, and he became angry. He prayed to the Lord, and said, 'O Lord! Is not this what I said while I was still in my own country? That is why I fled to Tarshish at the beginning, for I knew that you are a gracious God and merciful, slow to anger, and abounding in steadfast love, and ready to relent from punishing'.....

Then Jonah went out of the city and sat down east of the city, and made a booth for himself there. He sat under it in the shade, waiting to see what would become of the city.

Jonah is having a right sulk! Ordered by God to go to Nineveh, he takes a ship in the opposite direction - after all the Assyrians were famous for their violence! However, God has his way. The prophet is thrown over-board and is swallowed by a large fish who eventually spews him out. When God's second message comes Jonah obeys it and goes to Nineveh where he proclaims their destruction unless they change their ways.

So why is Jonah sulking when the whole kingdom repents? Is it because his enemies have listened to God's words? Perhaps he wanted their destruction. Or does he want God to deal only with the people of Israel? It's probably both. In the final verse of the story God says:

'And should I not be concerned about Nineveh, that great city, in which there are more than a hundred and twenty thousand people...and also many animals.'

As God's people we too need to be careful about deciding what God should or should not do! Our job is to pray for His intervention, not give Him a list of things to sanction!

Heavenly Father,
sometimes we get
that You are the Creator
of the whole world,
not just our little section of it,
and that you seek to call men
and women throughout the world
to turn to You.
Help us to remember that Your plans
are so much bigger than our
limited perceptions.
Amen.