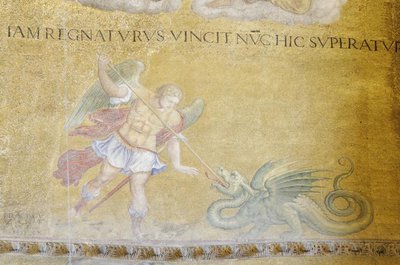 Today is the festival of Michael and all Angels, known traditionally as Michaelmas. It celebrates the warrior Archangel Michael, who is the most powerful of all the angels. Until recently I thought there were three or four Archangels, but no, there are apparently many more, often under slightly different names. Three Archangels are mentioned in our Bible::

As we see in today's reading from the book of Revelation, Michael is the Archangel who fought against Satan and his evil angels, and as we move into autumn and face the darkness of the winter months, he is the Archangel associated with protection. His name means 'he who is as God', and in stained glass windows or pictures he is often seen holding a sword.

We see Archangel Gabriel in Luke's Gospel when he goes to Zechariah to tell him of the imminent birth of his son John who would grow up to be John the Baptist, and also to Mary to announce the fact that God had chosen her to be the mother of His Son.

Archangel Raphael appears in the book of Tobit as a guide to Tobias, and in answer as to who he is he says he is 'one of seven angels who stand and serve before the Glory of the Lord.'.

May we go into the dark in safety this year accompanied by St Michael!

Heavenly Father,
may we not scorn to ask for help
when we need it,
but ask Your angels to assist us,
if we are in danger,
knowing that they seek only
to do Your will.
Amen.

You can learn more about Archangels by looking up this Christian site: