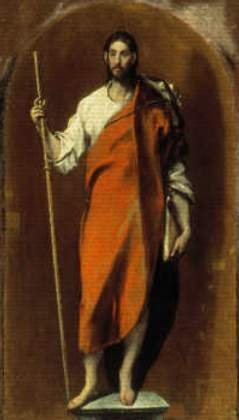 At that time prophets came down from Jerusalem to Antioch. One of them named Agabus stood up and predicted by the Spirit that there would be a severe famine over all the world, and this took place during the reign of Claudius. The disciples determined that according to their ability, each would send relief to the believers living in Judea; this they did, sending it to the elders by Barnabas and Saul.

About that time King Herod laid violent hands upon some who belonged to the church. He had James, the brother of John, killed with the sword.

Today we celebrate St James, the Apostle, often known as James the Great. He and his brother John were sons of Zebedee and Jesus called them from their work as fishermen. They lived in Capernaum, the place where Jesus made his base, and would likely have seen Jesus when he worshipped in the synagogue or walked along the shore. But when he called them to become 'fishers of men' they left their father and the hired hands and followed him immediately, we are told. The brothers were known as the "Sons of Thunder", possibly because of their fiery zeal, after all it was James who asked 'When will the destruction of the Temple happen?'

As a member of Jesus' inner circle he witnessed the raising of Jairus’ daughter, the Transfiguration on the mountain, and Jesus’ agony in the Garden of Gethsemane. But it was he and John who asked Jesus if they could sit at his right and left hand in the coming Glory, which upset the other disciples. We should note that Jesus has just explained that He was going to his death, and their answer as to whether they could “drink from the cup he is about to drink”, ie suffer the death that he will suffer, is an immediate 'Yes!'

From the passage above we can see that James was killed by Herod Agrippa in about 44 AD. He is the only Apostle whose martyrdom is recorded in the Gospels, and he is the Patron Saint of Pilgrims. His symbol is a shell. The shrine at Santiago de Compostela in Spain, where tradition has it that his body is buried, attracts Christian pilgrims today from all over the world.

Lord Jesus,
may we follow You
as faithfully as did the Apostle James
through his life and to his death.
Help us to call others to worship You,
to follow in his steps,
and to witness to You throughout our life.
Amen.

As we have seen tradition has it that Saint James' body was taken to Spain and buried there. You might like to find out more about Santiago de Compostela:

Or you can find out about the 'Way of St James' - the Pilgrimage known as the 'Camino', by looking up Wikipedia (as most signs are online booking sites, this seems the best one!):