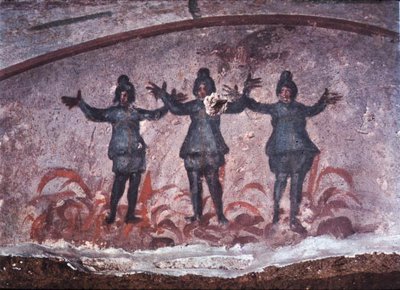 King Nebuchadnezzar made a golden statue...he set it up on the plain of Dura in the province of Babylon..... The herald proclaimed aloud, 'You are commanded, O peoples, nations and languages... to fall down and worship the golden statue.'...

At this time certain Chaldeans came forward and denounced the Jews....'There are certain Jews who pay no heed to you, O king.' Then Nebuchadnezzar in a furious rage commanded that Shadrach, Meshach, and Abednego be brought in.... He said to them.. 'If you do not worship, you shall immediately be thrown into a furnace of blazing fire, and who is the god who will deliver you out of my hands?' Shadrach, Meshach, and Abednego answered the king....'be it known to you, O king, that we will not serve your gods and we will not worship the golden statue that you have set up.'

Nebuchadnezzar was so filled with rage that he ordered one of the most strongest guards in his army to throw Shadrach, Meshach, and Abednego into the furnace of blazing fire.....Then King Nebuchadnezzar was astonished....He said to his counsellors, 'Was it not three men that we threw bound into the fire?...But I see four men unbound walking in the middle of the fire, and they are not hurt; and the fourth has the appearance of a god....'

Nebuchadnezzar said, 'Blessed be the god of Shadrach, Meshach, and Abednego, who have sent his angel and delivered his servants who trusted in him.'

Nebuchadnezzar, the king of Babylon, is determined to have his way. We have seen his temporary acceptance of God when Daniel ('Belteshazzar') is able to tell the king his dream and its prediction. But this doesn't last, and he establishes a huge golden idol for all his people to worship.

However, when Daniel's friends Shadrach, Meshach, and Abednego are denounced and subsequently thrown into the fire, the king has a second chance to recant and believe in God. The story is long, and only excerpts can be given above.

The point is that even a man like Nebuchadnezzar, who is steeped in blood, is given a second chance to change his ways. God gives us all numerous chances to change our ways, if we will accept them.

Lord God,
ruler of the universe,
help us to see that our ways
are often wrong,
and to change what we do,
accepting that Your way
of peace and love
is what you want from us.
Amen.