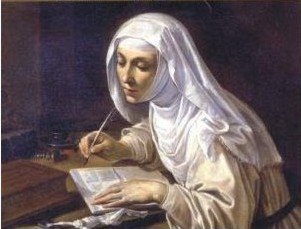 Does not wisdom call,
and does not understanding raise her voice?
Hear, for I will speak noble things,
and from my lips will come what is right;
for my mouth will utter truth;
wickedness is an abomination to my lips.
All the words of my mouth are righteous;
there is nothing twisted or crooked in them.
They are all straight to one who understands
and right to those who find knowledge.
Take my instruction instead of silver,
and knowledge rather than choice gold;
for wisdom is better than jewels,
and all that you may desire cannot compare with her.

You might wonder why the Church celebrates the lives of those who lived so long ago, but we have much to learn from them. Saint Catherine of Sienna was born in 1347 in Siena, in Italy. One of 25 children, most of whom died in infancy, she was to become one of two patron saints of Italy - the other being St Francis of Assisi. It is difficult to explain the term 'mystic', but we might think of it as the soul's ecstasy or rapture when contemplating God. Throughout her life she experienced mystical visions, and she became a member of the Dominican order, taking simple vows that did not include her living in a convent. She did not learn to read until well into adult life, and died on April 29th, 1380.

The most amazing thing about Catherine is her reputation for holiness and severe ascesticism (ie the refusal of food for instance), from someone of such humble birth. She worked among the poor and sick, and during her life she wrote some 380 letters,and 4 works known as The Dialogues as well as influencing two Popes. She was canonized (ie became a Saint) in 1461, a Doctor of the Church in 1970, and a Patron Saint of Europe in 1999.

When we look at her life we see that she put her relationship with God first, from which then sprung her love for others. We might want to question where we put our priority this day!

Lord God,
Catherine of Siena
made her relationship with You
a priority in her life.
She yearned to be close to You
and to learn more about You.
From this came her desire to help others.
May we aim to get closer to You -
to put on one side the things of this world
and learn to listen to Your voice.
May we set aside time for You,
to be quiet and pray.
Amen.

If you would like to learn more about Catherine of Siena, this children's site might be interesting: