Commandments Luke Chapter 16 Loving One Another 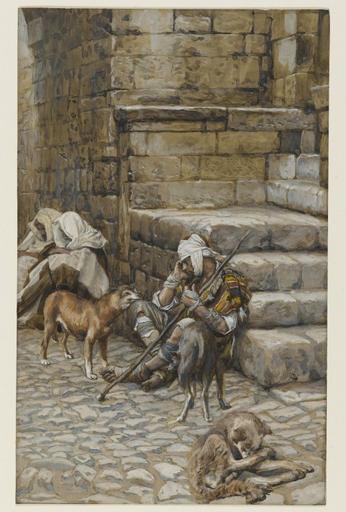 Jesus said, 'There was a rich man who was dressed in purple and fine linen and who feasted sumptuously every day. And at his gate lay a poor man named Lazarus covered with sores, who longed to satisfy his hunger with what fell from the rich man's table; even the dogs would come and lick his sores. The poor man died and was carried away by the angels to be with Abraham. The rich man also died and was buried. In Hades, where he was being tormented, he looked up and saw Abraham far away with Lazarus by his side. He called out. "Father Abraham, have mercy on me, and send Lazarus to dip the tip of his finger in water and cool my tongue; for I am in agony in these flames." But Abraham said, "Child remember that during your lifetime you received your good things, and Lazarus in like manner evil things; but now he is comforted here, and you are in agony. Besides all this, between you and us a great chasm has been fixed, so that those who might want to pass from here to you cannot do so, and no one can cross from there to us."

The story of the rich man and Lazarus is a wonderfully descriptive story. We don't know if these two were real people or if this was a parable (that is a story with a heavenly meaning), but it is interesting that the rich man is given no name. In the past it was the custom to call him Dives (which merely means rich in Latin).

When they both die the poor man goes to be with Abraham, and the rich man goes to Hades (a Greek word that seems to have a similar meaning to Sheol , ie the place of the dead). It is not necessarily hell, rather a place of waiting.

The purpose of the story is not just to describe the difference between the two men, but to show us that the rich man has no compassion or pity in him, and does not even seem to see Lazarus. Yet a moment's thought and a little kindness could have changed the poor man's life. It is this, his hardness of heart, that condemns him. The story does not condemn the possession of wealth, but its heartless and selfish use. How we use what we possess is what is important!

Almighty Father,
give us compassion towards those
who need our help;
help us to see what is under our nose;
to give and not to count the cost;
and to use what we possess
to relieve the want of others.
Amen.