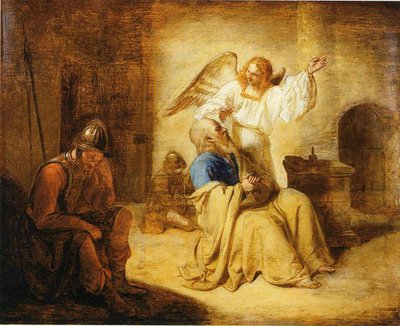 King Herod...proceeded to arrest Peter... When he had seized him, he put him in prison and handed him over to four squads of soldiers to guard him, intending to bring him out to the people after the Passover. While Peter was kept in prison, the church prayed fervently to God for him.

The very night before Herod was going to bring him out, Peter bound with two chains, was sleeping between two soldiers, while guards in front of the door were keeping watch over the prison. Suddenly an angel of the Lord appeared and a light shone in the cell. He tapped Peter on the side and woke him, saying, 'Get up quickly.' And the chains fell off his wrists. The angel said to him, 'Fasten your belt, and put on your sandals.' He did so. Then he said to him, 'Wrap your cloak about you and follow me.' Peter went out, and followed him... he thought he was seeing a vision. After they had passed the first and second guard, they came before the iron gate leading into the city. It opened for them of its own accord, and they went outside and walked along a lane, when suddenly the angel left him...

As soon as he realised this, he went to the house of Mary, the mother of John whose other name was Mark, where many had gathered and were praying. When he knocked at the outer gate, a maid named Rhoda came to answer. On recognizing Peter's voice, she was so overcome that instead of opening the gate, she ran in and announced that Peter was standing at the gate. They said to her, 'You are out of your mind!' But she insisted that it was so. They said, 'It is his angel.' Meanwhile, Peter continued knocking; and when they opened the gate, they saw him and were amazed.

This is the second time an angel has freed Peter from prison (see Acts 5.17-27), and Herod is determined this won't happen again, so he doubles the guard, manacling him to two soldiers inside the cell and increasing the number outside. Determined that he will be seen as someone who observes the Passover regulations, Herod leaves Peter there until after the feast. However, as before God intervenes and an angel frees the apostle. The little details in this account are wonderful. Notice the instructions on how Peter is to get dressed; the way that the angel touches Peter 'on the side'; and that.Peter believes it is a vision.

But it's the second part of the story that's always appealed to me. When Peter goes to the house of Mary the mother of John Mark, the maid is so amazed that she leaves him standing in the lane, and those in the house dismiss her claims as madness. All this time Peter is left outside knocking! Again, notice the detail: we get the name of the maid - Rhoda; Peter knocks at the 'outer gate'; they assume it's an 'angel'; and Peter keeps on knocking.

But underneath all this story are the words 'the church prayed fervently to God', and 'many had gathered and were praying'. Again and again amazing things happen in Luke's 'Acts of the Apostles', and always because the faithful are praying. We should not assume things have changed. Our world has great need of God's help at present, and each of us has a duty to pray, and to keep asking for God's help. Miracles still happen if we are faithful!

Lord Jesus,
the members of Your new church
were constant in prayer
when life was difficult and people were in danger.
Help us to be as faithful
in turning to You when we're in need,
and to continue praying ceaselessly,
for Your world, for all people, and for ourselves,
knowing that You have promised
that You will listen and answer our petitions,
as is best for us.
Amen.

You might like to do this Trivia Quiz based on Acts 12. No prizes if you get it right - you might need to look up the whole passage, below, to answer questions 1, 8 and 9:

For the full text of this passage, see below: