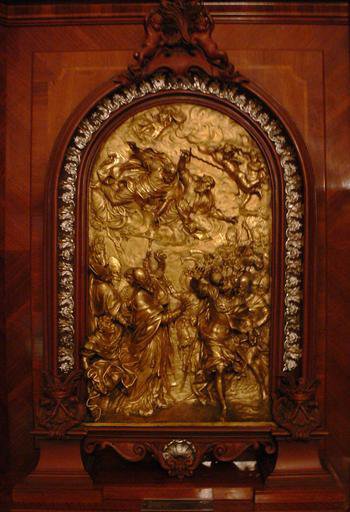 * Picture of Leo the Great meeting with Atilla the Hun.

My covenant with him was a covenant of life and well-being, which I gave him; this called for reverence, and he revered me and stood in awe of my name. True instruction was in his mouth, and no wrong was found on his lips. He walked with me in integrity and uprightness, and he turned many from iniquity. For the lips of a priest should guard knowledge, and people should seek instruction from his mouth, for he is the messenger of the Lord of hosts.

The reading above comes from Malachi - the last book in the Hebrew Scriptures (our Old Testament). The ministry of this fairly anonymous prophet occurred in Jerusalem during the era of Nehemiah and Ezra. Although speaking to the people of his time, he would also prophesy that a 'forerunner' who would announce the appearance of Christ. John the Baptist was to do exactly this 400 years after the death of this prophet. Malachi here praises Levi, the fourth son of Jacob who became the founding father of one of the twelve tribes of Israel - the Levites - who were to be the priestly tribe.

Today we think about Leo, Bishop, Doctor and then Pope who died this day in 461 CE (so we span centuries from Levi, possibly 1,450 BCE, to Malachi 400 BCE, to Leo 461 CE, to ourselves!). Malachi might be writing about Leo the Great who became pope in 440 CE. He twice proved his bravery in saving the citizens of Rome from invading barbarians. He was an eloquent and wise preacher, using simple gospel texts to proclaim the Christian faith. His admin skills were unrivalled and he used the resources of the Church for the good of the people. Rather than further confuse Christians by entering into the controversy over the person of Christ, Leo spoke simply of the humility of Christ who was divine and human in his compassion, uniting biblical images in prayer rather than causing division in debate.*

* Taken from 'Exciting Holiness for the festivals and lesser festivals of the Church of England'.

Almighty God,
who called Levi to be a priest,
Malachi to be a prophet,
and Leo to be a Pope
in Your service,
may we recognise
that we too are called to serve You
though in a different time and place.
As we think of the life of Leo this day,
may we learn something from him
and be renewed in our calling
to be Your people.
Amen.