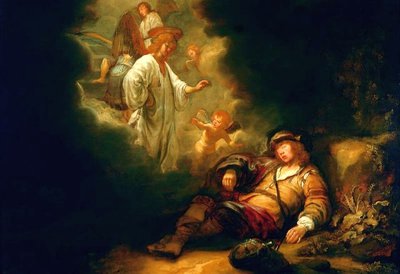 Jacob left Beer-sheba and went towards Haran. He came to a certain place and stayed there for the night, because the sun had set. Taking one of the stones of the place, he put it under his head and lay down in that place. And he dreamed that there was a ladder set up on the earth, the top of it reaching to heaven; and the angels of God were ascending and descending on it. And the Lord stood beside him and said, 'I am the Lord, the God of Abraham your father and the God of Isaac; the land on which you lie I will give to you and to your offspring, and your offspring shall be like the dust of the earth, and you shall spread abroad to the west and to the east and to the north and to the south and all the families of the earth shall be blessed in you and in your offspring. Know that I am with you and will keep you wherever you go, and will bring you back to this land; for I will not leave you until I have done what I promised you.'

Jacob has received the blessing of the firstborn son, although he is the second son, and Isaac his father is beginning to realise that this might be God's will, despite Jacob tricking it out of him (see Genesis Chapter 27). Accordingly he and his wife Rebekah arrange for Jacob to return to her father's family to find a wife from her brother's family, rather than marry a pagan Canaanite woman.

So he sets off heading eastward towards the ancestral lands of his grandfather, Abraham, and his mother Rebekah. During his first night away he stops to rest for the night, using a stone as a pillow, and while he is asleep he dreams. He sees a ladder set up from earth to heaven, and on it angels ascend and descend. For the first time in his life he is aware of God in a personal way. Like his father and grandfather before him, God makes a covenant with him. God promises to make him the father of thousands, and through him to bless all nations, and to be with him always. Jacob would have been told of the covenant made with his father and grandfather before him, but now in a life-changing moment, God makes the covenant personally with him.

We too have made an agreement with God - we made this at our Baptism and we remade it at our Confirmation. It was made personal to us, as it was to Jacob, and we should remember that God is also always with us.

Heavenly Father,
You called Jacob to be Your man and
to make an agreement with You.
You called us in the same way,
and we have heard Your call.
Help us to keep our side of the bargain:
to worship You as the only God;
and to follow Your commandments.
Amen.

You might like to look up this timeline from Abraham to David, and see where Jacob appears: