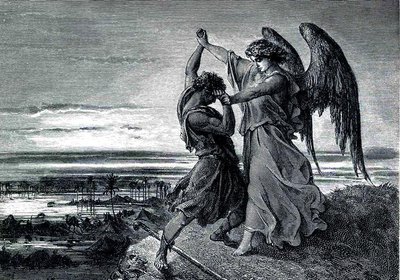 The same night Jacob got up and took his two wives, his two maids, and his eleven children, and crossed the ford of the Jabbok. He took them and sent them across the stream, and likewise everything that he had. Jacob was left alone; and a man wrested with him until daybreak.

When the man saw that he did not prevail against Jacob, he struck him on the hip socket and Jacob's hip was out of joint as he wrestled with him. Then he said, 'Let me go, for the day is breaking.' But Jacob said, 'I will not let you go, unless you bless me.' So he said to him, 'What is your name?' And he said, 'Jacob'. Then the man said, 'You shall no longer be called Jacob, but Israel, for you have striven with God and with humans, and have prevailed.' Then Jacob asked him, 'Please tell me your name.' But he said, 'Why is it that you ask my name?' And then he blessed him.

We pick up the story of Jacob again, some considerable time later, after he has been tricked in marrying the wrong sister, Leah, and had to serve another seven years to be married to Laban's other daughter, Rachel. If we look at Jacob we see that all his life he has been a schemer. He had stolen his twin brother's blessing from his father Isaac with all the benefits of the first-born son, before fleeing to his mother's family. After twenty years of working for his Uncle Laban he has now tricked his Uncle out of the choicest goats and sheep before fleeing to his homeland in Canaan, towards the possibly still angry brother, Esau. But the prodigal is returning with two wives, eleven children, and a vast herd of livestock and servants!

Jacob has already sent a message to Esau to inform him of his return, when he hears that he is coming to meet him with hundreds of men. Jacob is afraid. Having sent his people over the Jabbok brook to safety, he returns to the camp alone to pray. However, hes'still not willing to just rely on God for help, as we shall see later. In this frame of mind, partly planning how he he will cope with Esau and his men, and partly wanting God's help, we are told 'a man wrestled wit him until daybreak'. Some bibles say that an angel wrestled with him. We are undoubtedly to read into this that Jacob is wrestling with himself and with God. He only gives way when the man injures his hip - then he is vulnerable, and must rely on God's help, learning that it is God, not Esau who is the strongest. Realising he needs God, he is finally humbled. God blesses him and gives him a new name, that of 'Israel'.

How often do we also think we can sort out our own problems, rather than rely on God's strength?

Heavenly Father,
help us to realise that You
are our only strength;
that every problem
pales into insignificance
when we turn to You;
and that with You on our side
all things become possible.
Amen.

You might like to look at this piece of simple drama concerning this story,from The Riverside Church: