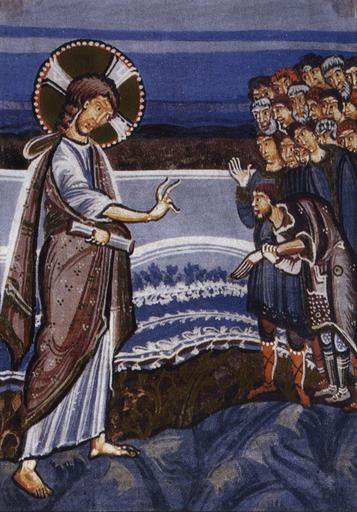 Again Jesus entered the synagogue, and a man was there who had a withered hand. They watched him to see whether he would cure him on the sabbath, so that they might accuse him. And he said to the man who had the withered hand, 'Come forward.' Then he said to them, 'Is it lawful to do good or to do harm on the sabbath, to save life or to kill?' But they were silent. He looked around at them with anger; he was grieved at their hardness of heart and said to the man. 'Stretch out your hand.' He stretched it out, and his hand was restored. The Pharisees went out and immediately conspired with the Herodians against him, how to destroy him.

Mark's Gospel shows Jesus healing dozens of people from the opening of the Gospel, and from Chapter 2 we see the Pharisees, Scribes and even those who supported Herod, beginning to conspire against him.

I remember as a child in Germany playing with a friend who had a whithered arm caused by polio, and although she managed well there were many things she couldn't do when we played on the swings and roundabouts. The man with the whithered arm would have found it even more difficult in an agricultural society, and Jesus has compassion for him and heals him, though healing was considered work and should not be carried out on the Sabbath. What saddens Jesus is his opponents hardness of heart who put the rule book before their love of others. Jesus always puts love of God and love of others before any other rule.

Be honest with yourself, do you ever look at others in society and make judgements that are not loving? Can you put love for other people before everything else?

You might like to remind yourself that God sees everything, and is a part of our life from birth to death:

and at how we should look at other people: