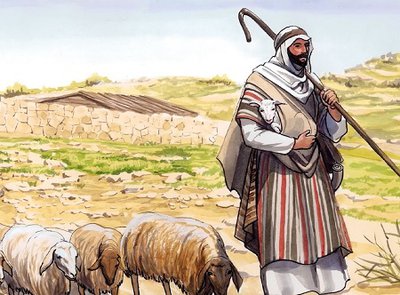 For thus says the Lord God: I myself will search for my sheep, and I will seek them out. As shepherds seek out their flocks when they are among their scattered sheep, so I will seek out my sheep. I will rescue them from all the places to which they have been scattered on a day of clouds and thick darkness.....I will feed them with good pasture, and the mountain heights of Israel shall be their pasture, there they shall lie down in good grazing land, and they shall feed on rich pasture on the mountains of Israel. I myself will be the shepherd of my sheep, and I will make them lie down, says the Lord God. I will seek the lost, and I will bring back the strayed, and I will bind up the injured, and I will strengthen the weak...I will feed them with justice.

On my first weekend in Cumbria in a new parish, I discovered a lot of sheep had escaped and managed to push open the gate which hadn't been latched properly and were eating the lush grass on the verge. Somehow I got them into the field and put the gate back - which was enormously heavy. I now knew why there was a cattle grid in front of the Vicarage!

Through my study window I could see another large field of sheep. I watched the way the mothers kept control of twins and even triplets; how some of the lambs kept wandering away until the mother recognised their cry; I noticed the lambs who constantly found escape holes; and the sheep who rebuffed lambs that weren't their own. On the end of a bookcase I had a name and a phone number, and would ring the owner if I thought there was a problem as he lived a few miles away.

The verses from Ezekiel, written six centuries before Jesus' birth are about God shepherding the nation of Israel - the nation that He has made a covenant with and taken under His wing. He complains that the 'shepherds' (which can mean a king or a prince, or a spiritual leader) have not been looking after the sheep (his people), they have grown fat on the profits of their work, and so He will take on the job of nurturing and caring for them. These are the words from the Hebrew Scriptures (our Old Testament) that Jesus knew well and which he uses later when he speaks of himself as the Good Shepherd.

Today, it is comforting to think that these words still speak to us just as clearly. God cares for each one of us as though we were sheep. He rescues us, he seeks us out when we get lost, he binds up our injuries, strengthens the weak, and gives us justice.

Lord God,
that Great Shepherd of the sheep,
who through Ezekiel prophesied that You
would care for Your people,
as a shepherd cares for his sheep.
We ask your blessing on us this day
that You will hear our cry when we are lost;
strengthen us when we are weak;
bind up our wounds when we hurt;
and rescue us from danger,
Amen.